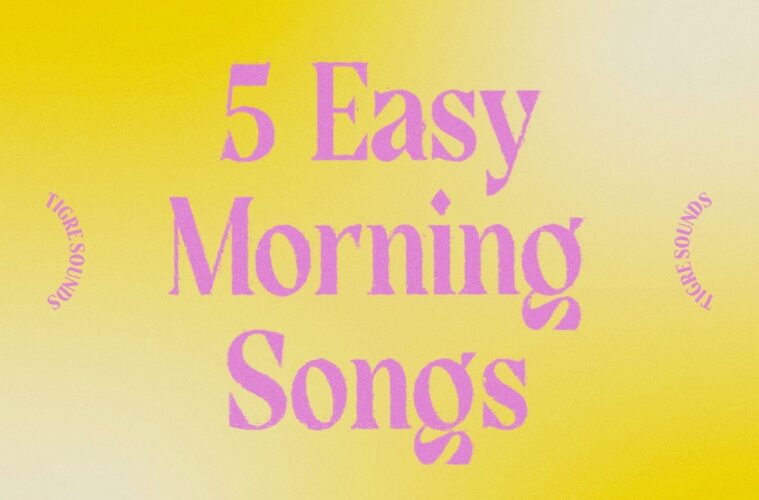 Waking up slow in the morning is a delicious experience, one often fueled by the thought of drinking coffee to a great song. Of course, there are some pick-me-up classics to get out of bed, including Bob Marley’s “Three Little Birds”, The Beatles’ “Good Day Sunshine”, Beach Boys’ “Good Vibrations”, and The Rolling Stones’ “Start Me Up”. More contemporary hits include Outkast’s “Hey Ya!” to Pharrell’s “Happy”. All of those tunes are great for recharging one’s energy and starting the day on a high note. However, some mornings deserve to be calm and smooth, without the need to rush. Here are five songs for an easy morning.

Many of us can’t start the day without a cup of coffee. It’s like our fuel, and ideally an interrupted moment of magic.  This is how the Valencian singer-songwriter Jimena Amarillo understands it. However, she doesn’t apply any analogy here – which would be to wake up with a loved one next to her – but rather exalts the morning coffee to paint a loving look of desire. “It’s like cafeliko / That I drink when I wake up / How brown, black eyes / I can’t look at you / Without thinking about how to caress you,” she sings.

Jimena Amarillo Peiró is young at just 20 years old. She began making music almost at random, testing her voice in other people’s songs, until she gathered a small repertoire of covers. Then, not long ago, she took a big step, venturing to write her own songs. Some of her top songs include “Diferente”, “Ni Se Nota”, “Solo Quiero Más” and “Cafeliko”. She describes her music as “indie-pop sappy”, which is precisely what we’d like to listen to in the first hours of our day.

On a cold morning, there’s nothing better than wrapping ourselves in wool blankets, soft to the touch, resistant, and useful. It’s clear that singer and rapper, Tkay Maidza, titled her new single “Cashmere” for good reason. In her song, she describes the aftermath of a passionate night. Those slow soul beats and her hypnotic voice is perfect for the sweet nights spent with lovers, and the slow mornings we spend waking up with them.

Takudzwa Victoria Rosa Maidza was born in Harare, Zimbabwe, but her family moved to Australia when she was five years old. Towards the end of 2014 at just 17 years old, she released her debut EP Switch Tape. Two years later her album Tkay came out. Between 2018 and 2021 she’s been focused on a series of EPs titled Last Year Was Weird. The single “Cashmere” belongs to the third volume, released this year.

Since its inception, back in the 50s, lounge music set out to reconcile the sensuality of jazz with lighter and quieter rhythms, moving away from any overloaded instrumentation. The slowed-down beats and the airy melodies of bossa nova definitely helped develop a unique style. Swiss brother duo, Okvsho, seems to have studied this musical journey in detail. Their chill-out vibe makes them incredible jazz and lounge musicians, but their sounds also include soul, hip hop and various rhythmic excursions around the world.

This song, which is part of their acclaimed 2018 EP Traphouse Jazz, has nothing to do with the snow-capped mountains and cold lakes of their home in Zurich. Rather, it’s a dream trip to a Brazilian beach, accompanied by a perfect cocktail of smooth beats and silky vocals. Of course, part of the credit goes to her guest singer, Sreya (aka Luana Bürgger). The chemistry of the track infused with her voice was so good that they repeated the formula in two following singles, “Descobrir” and “Kamala’s Danz”, from their debut album released last year.

The key to having a pleasant and easy morning, free of any worries, seems to be at the heart of this ten-year-old song – the oldest of our picks. We love waking up to a gorgeous melody, sustained by clapping hands and Spanish guitars, reminding us of moments in life when we’re completely content. The song gives us the feeling that no matter what happens in the external world, nothing is going to disturb our morning and our sense of peace. The coffee is still steaming, and the slippers remain firm on our feet.

The singer-songwriter, Luis Alberto Alemaza López from Madrid, went through a few bands including Los Hijos de Han Solo and Los Sitios, before debuting as a solo artist in 2009. “Dicen Por Ahí” belongs to his EP De lo dicho nada (2011), a great collection of songs in which he reflects his ironic, celebratory and original perspective on life.

Last, but certainly not least, this song is one of our favorites, though it does come with some mystery. First, we wonder about the song’s author. Who’s Papi? As far as we know, this is a musician from São Paulo. His last appearance is from this year and is a collaboration on DJ Hey Caat’s single “Fliperama”. Before that, there’s an EP: Sonetos à Vênus. In this four-song EP, we find the charming “Doces Bárbaros”, which could well be a tribute to the MPB supergroup that Gilberto Gil, Caetano Veloso, Maria Bethânia and Gal Costa formed in the mid-70s.

An acoustic guitar pulses the basic chords to wake up in the best way. The melody comes through a beautiful voice that takes us to a beach in Rio. There’s a rap passage, there are crossovers of voices, and there are stories and references to the picturesque settings and characters of bossa nova. This song is romantic, full of heart, and perfectly positioned to set our souls ablaze with feeling for the rest of the day. Though there are some mysteries, to life and to this song, all we know for sure is that we want more of this.