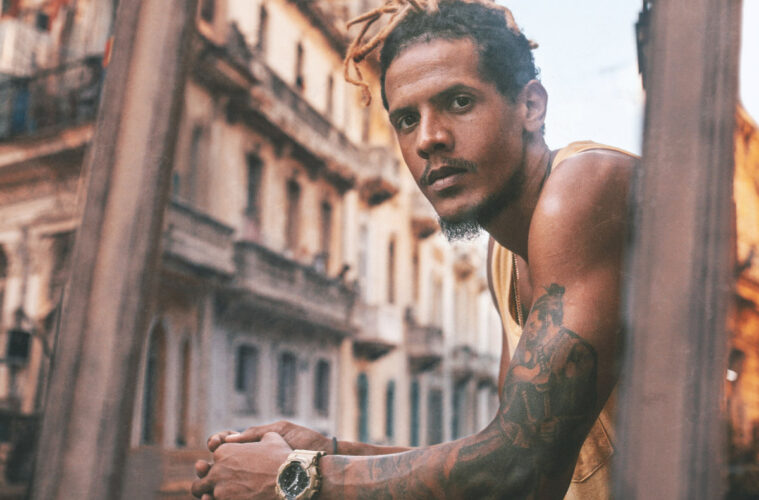 A scrapbook of phrases and the wisdom you learn from embracing the contradictions and bittersweetness of life with a smile. That is what El Individuo’s new EP – 2020 Escribo feels like.

After listening to Cuba’s El Individuo’s (aka Rafael Bou) music on infinite loop for the past days I am more and more convinced that he is one of the best kept secrets of Spanish speaking rap around the world. His new album is a fine mix between musicality and very well thought lyrics. Both elements combine in such a special way as you would find in the most iconic albums of Calle 13, or To Pimp a Butterfly by Kendrik Lamar.

El Individuo has been part of Cuban hip hop history for many years. He grew up listening to local rap groups such as Doble Filo and Obsesión, and then embraced the school of Cuban conscious rap group Los Aldeanos to craft his own lyrical style with the Con100cia crew alongside JD Asere and producer Dj Lapiz. Unlike Los Aldeanos, El Invidivuo’s conscious approach to rap has never been focused on politics. Instead it tries to transmit his particular vision of life, one that constantly juggles between lightness and darkness, happiness and hardship, going back and forward almost endlessly in each track through very well thought verses.

After playing for many years with Con100cia he is using his solo material to level up the great amount of detail he normally puts into his lyrics with the amount of musicality that goes in each track. Thus anchoring his personal sound by taking the time to replace record samples with live instruments and treating hip hop as a new form of jazz.

This is what leads us to the first track of his EP. “Bolerón” is a slow introduction into the album, which at a first glance could be mistaken as a Cuban record being sampled on a hip hop beat. The song lays some bolero trumpets and pianos on top of a modern trap groove just as Silvito El Libre does in “Uppercut 5”. However, as the track moves forward, the beat is painted with ambient pad harmonies and vocal choruses that take it to a new place reminiscent of how bands like The Avalanches bring opera sentimentality to hip hop on their track “Electricity”.

After that introduction, the album picks up in energy with “Piensa”, a rap track that has a very combative energy. In this song the comparisons with Calle 13’s Residente become more present. Firstly, the upfront lyrics that are trying to pick up a fight with whoever is listening, navigate on top of a cold beat made up of synths and trumpets in the same way Calle 13 does on their song “Que lloren”. Secondly, throughout the verses, El Individuo expresses that artistic skills and street credibility can go hand in hand to make you a kick-ass rapper, something that we’ve seen Residente express in many of his lyrics throughout his career. This is done by dropping powerful punch lines such as “Aunque fui de escuela también fui de bronca”.

“Como Quieres Que Sea” is one of the two tracks in the album that make it clear that El Individuo’s eyes are focused on what’s going on in the L.A. scene where hip hop artists and jazz musicians such as Thundercat, Kendrick Lamar and Flying Lotus are erasing the lines between both genres. Here the beat is carried along by a trumpet hook that is played and altered three times on top of each other, feeling jazzy yet experimental and still very hip hop.

Another important element of this track is that once you hear it it makes you want to jump on the beat to spit some lyrics, even if you don’t have a clue about freestyling. This is something that El Individuo’s music constantly makes you feel. Specially in the last track of the album, named also “2020 Escribo”. Here, the approach is similar, where jazz musicality is taken to the hip hop craft. However, instead of trying to express a story, in this track the lyrics feel like Rafa is just writing from his bed at night. Simply printing the subliminal images that come into his mind.

Before concluding, we have to go back on the track list to one of the most peculiar songs of the album: “No Me Mientan”. Here the play of opposites is taken to excellence by contrasting “mentira” (lie) and “verdad” (truth) all throughout the song, saying each of one of them like a 100 times in each verse until they turn into characters with their own nature almost like Julio Cortazar assigns the personalities to his Cronopios and Famas.

But that is not the end. The instrumental is also very interesting. Personally, it struck a chord with my inner Wiley and Skepta fan because it reminds me so much of Nadia Rose’s “Skwod”. This characteristic added to El Individuo’s kick ass “mentira-verdad” lyrics that make this track a great blueprint for what could be a very fresh Latin or Cuban approach to grime.