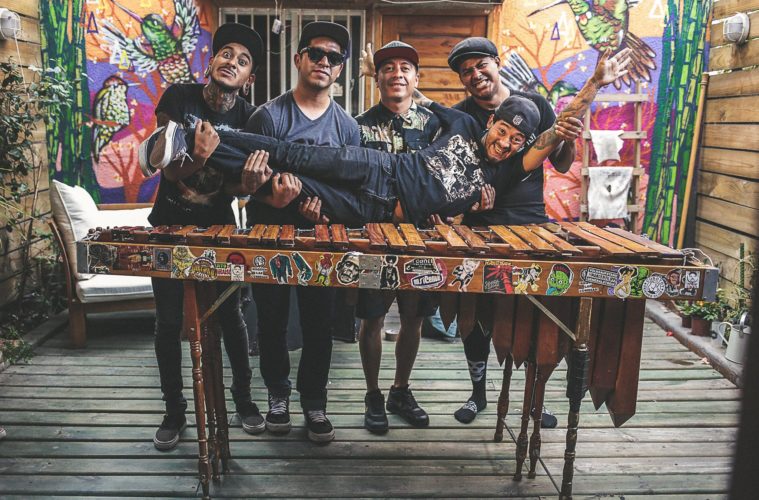 Photo by Ana Fuentes via Remezcla

Born and raised in the deep outskirts of Mexico City, the Gama brothers are keeping alive the rich legacy of marimba music with their latest project, Son Rompe Pera. While firmly rooted in the tradition of this historic instrument, their fresh take on a folk icon challenges its limits as never before, moving it into the garage/punk world of urban misfits and firmly planting it in the 21st century.

Their debut album Batuco, named after their recently-departed father who taught them the marimba, was released on AYA Records on Feb 29th, 2020. Before Batuco’s release it was previewed by three video-singles, including their updated version of the classic “Los Chucos Suaves” featuring the lead singer of Chile’s most famous cumbia band (and the producer of their record) Macha on guest vocals.

The album was an immediate success for the independent pan-Latin label, garnering praise in US Billboard Magazine as well as from media in France, Spain, Mexico, Colombia, and more. Their plans for 2020 – which included 3 European tours with stops at iconic festivals like WOMAD UK and Fusion, and 2 trips to the USA – were all cut short due to the Covid-19 pandemic. They have kept busy during quarantine by being on the forefront of live streamings, where they’ve taken advantage of the fact that the three brothers all live together and can keep performing energetic shows even while on lock-down in their hometown of Naucalpan.

This month they release a new video for their song “Mi Vida Sin Tu Amor”, the only ska-influenced song on their debut album. The group tells the story of the first day they were in Chile (their first day ever outside of Mexico) where the lead singer of Chile’s longest active ska band, Sonora de Llegar, Miño, dropped by Macha’s studio where the band was just setting up. Macha suggested they all jam and together they landed on covering a song.

Written by the “Godfather of Ska” Laurel Aitkin, it’s the final track on his only Spanish language album during his 50+ year career. Born in Cuba but moving to Jamaica at an early age, Aitkin is an absolute icon in the Caribbean and ska world, being the first internationally known Jamaican artist credited with helping transform the island’s music into the powerhouse that it became. His fame exploded when he moved to London in the late 50’s, taking his sound to the immigrant and working communities of Brixton, where he occasionally used the Skatalites as his backing band. Although Spanish was his native tongue, his discography was completely in English until well into his 70s, when he finally realized his dream of making a Spanish-language album with the Madrid-based ska band The Skarlatines, using his birth name “Lorenzo” as the record’s title. While this album never rose to a commercial success, it’s always been regarded as a triumph for Latino and Spanish ska bands, a cult secret.

That first day that Son Rompe Pera was in Chile, they laid down the basics for what would be their version of “Mi Vida Sin Tu Amor”, with Miño doing the vocals, Macha at the recording desk, his band El Bloque Depresivo preforming the track, and Son Rompe Pera adding their distinctive marimba. A Mexican-Chilean version of a Cuban-Spanish underground ska classic, completely re-vamped and ready for a new generation. The song is usually chosen to end the set, whether it’s a concert of El Bloque Depresivo or Son Rompe Pera, as it’s guaranteed to get the audience whipped into a stomping frenzy.

The video was shot around various locations in Mexico City in October 2019 by Chris Vinan, showing a more intimate side of the group as they stroll through various street markets and get ready for shows in cramped backstages before giving their absolute all on-stage and collapsing after a chaotic punk finale. Its a candid view of everyday Mexican life over a ska backbeat, as this rising young band improvs their way to the top.