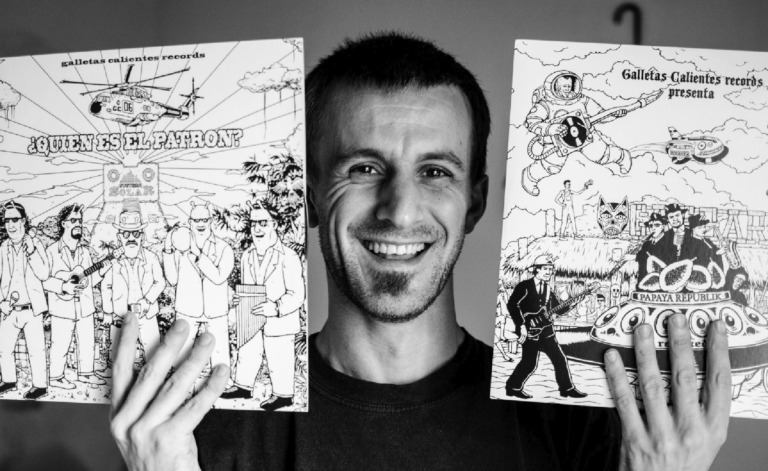 Taking their creative direction to the next level, record label Galletas Calientes’ releases feature captivating music and visuals, supporting the Colombian arts scene all the way.

Hot cookie anyone? Colombian-based label Galletas Calientes (meaning “Hot Cookies”) has been serving up freshly baked party music and modern folklore since 2004. Representing an eclectic roster of artists playing everything from Electro to Tropical to Breakbeat, the label has established itself as one of the go-to purveyors for Latin music with a contemporary twist, consistently releasing the most innovative musical fusions. But it’s not only their killer tunes that caught our attention. As we explored their catalogue, we were equally dazzled by the art direction on their album releases.

Operating out of Bogotá, Colombia, Galletas Calientes was founded in France by Mathias “DJ Galletas Calientes” Lederer and Federico “Krak In Dub” Trujillo; both key players in the underground rave movement in France during the 1990s. Their participation in the scene laid the foundation for the label’s strong graphic identity. Visual art plays an important role in rave culture helping to immerse the crowd in and colors facilitating the ultimate sensory experience.

“Having something to look at when you’re listening to music is very satisfying. Visual art is here to help you dive into the musical artist’s world, and vice versa,” Mathias explains. “Most of the time when I listen to music, I have precise images in mind and I always try to find an artist who can faithfully illustrate these images… I want them to be inspired by the music and express their own personal feelings and style in their work – and to enjoy it.”

With an objective of promoting the Colombian music scene, the art direction for its releases provided another opportunity for the label to engage local artists. As Mathias learned about the Colombian art scene, he quickly realized the abundance of very talented Colombian artists, “when I moved to Colombia, I wanted to work with as many Colombian artists I could. I found that Colombian visual artists, whose cultural diversity is so impressive (Indigenous and Afro backgrounds, cultura picótera, traditional graffiti inspired by history and ethnicity, etc), were so talented in so many different ways, that I could find the perfect one for each of the albums released on the label, even if the music wasn’t from Colombia.”

Detailed and thoughtful to say the least, each graphic illustrates the parallel dimension you will travel to while listening to the accompanying music, and represents a who’s who of the key visual artists in Colombia today. The vivid colors and eye-popping Latin symbolism on the AfroColombian Remix vol 1 & vol 2 series was originally hand-painted by William Gutiérrez Peñaloza, one of the most renowned “picó” sound-system visual artists from Barranquilla. For his latest album, Camaleon, Venezuelan-born Caribombo collaborated with one of the most prominent street artists in Colombia, Oscar González “Guache”, to create a stunning mural-esque design.

One of the biggest names in Colombia’s music scene, Systema Solar, worked with up-and-coming Medellin-based artist, Teo Calavera, on their geometric and psychedelic vision for La Revancha del Burro. And these are just the tip of the iceberg. Other Colombian visual artists who have graced the covers include: Sergio Alferez “Saga Uno”, Ricardo Vasquez Navas “Yurika mdc”, Luis Felipe Hernández “Nuino Visual”, Mateo Rivano and Alex Rojas.

So, grab your headphones and your glasses, and take a deep dive into the colorful world of Galletas Calientes – where you are in for the ultimate sonic and visceral experience.