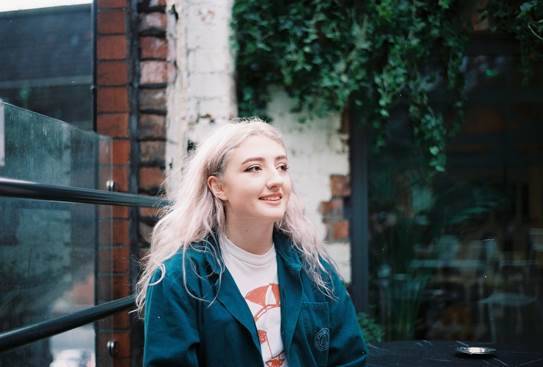 “Te encuentro en cada canción that I write.” Nina Cobham reveals her silky-smooth voice with a hint of naivety, making her Spanglish flow totally effortless. The song is called “por razones sentimentales” and is included on What Colour Does This Feel Like?, the debut EP she released in the middle of last year. Before, the British singer-songwriter had only uploaded a handful of singles. Now, there are eight songs in total, but they were enough to catch our attention. What’s next for the artist? We’re not sure, but it certainly is looking promising.

Born in Leeds, with part of her childhood spent in Spain, and currently residing in Manchester, Nina felt magnetized by music from an early age. In fact, at the age of 15, she was already releasing songs on Soundcloud. Of course, there was a breaking point in her songwriting. “I was sat at dinner with some family friends who have been a really core part in my upbringing, and they joked about me making music for my English family and not them – that was the point where I really made a conscious decision that I wanted to write with Spanish to be inclusive of them,” she revealed in UK’s Haste Magazine.

“Too Much” is the main cut of her EP and the most produced video clip for one of her songs. Cobham explains that this song “was literally written to soundtrack this scene we had in mind, there are aspects of the sound that were designed to portray aspects of a party.” Before, she had ventured with more casual images, surrounded by friends, to accompany “Sola”, one of her first singles. Supported by the successful musical production of Mattu, Nina unfolds her voice to embellish a relaxing atmosphere on an exquisite jazzy groove.

Songs like “Interested” carry traces of that bedroom R&B and confessional mood that set the tone for Nina’s early career a few years ago. It was a short, but vertiginous adventure, in which she left behind her small acoustic format in pursuit of a more rhythmic and colorful production. She stated that at first, it was just a small circle of close friends listening to her music. “The rest was just a snowball effect really,” she said.

Nina naturally alternates between English and Spanish in the same song. It doesn’t matter if it’s a verse or a chorus: both languages ​​sound melodious and sultry in her velvety vocals. It’s like a charming and mysterious whisper that sways and amplifies in our ears. That way of singing – added to a musical production of minimalist atmospheres and deep beats – seems to bring her closer to Billie Eilish, at least on first listen. But that’s where the similarities end: Cobham has her own identity as a lyricist and composer, with her background and her life story. Also, her music tracks are more trip-hop than electropop.

Due to her Spanish influences and her bilingual skills, the British media placed Nina very close to another emerging young woman: Biig Piig, an Irish-born, London-based singer and rapper. Will there be a collaboration between the two? For now, Cobham has already shown her flexibility when it comes to sharing talents with two appearances on Xadi’s songs: two years ago on “Mañana” and more recently on “Timing.”