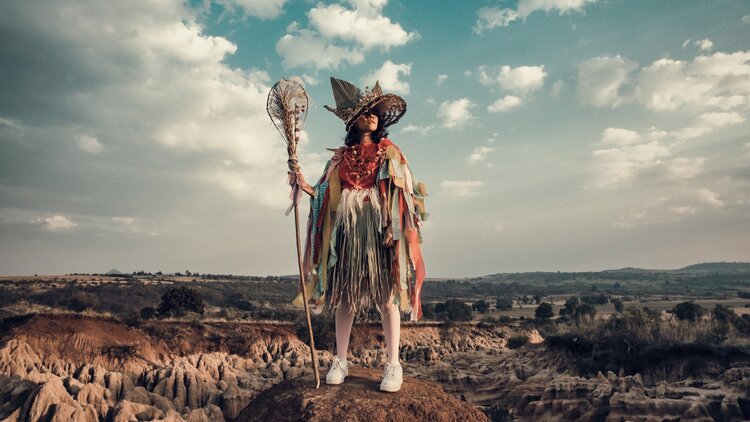 There are some things in this world that are worth the wait, and that’s how we felt as the singles from Deja began to reach our ears. This long-awaited first album by Bomba Estéreo finally dropped after four, seemingly long years. Li Saumet explains the album as being about “the connection and disconnection of human beings, how we’re disconnected, more connected to electronic devices and virtual things than real things.”

Their third video, “Ahora”, is about connecting with nature and enjoying the simplicity of life, reinforced with an initial meditation: “I’m here. I’m sitting in the right place, at the right time. Let your heart open, and repeat this mantra: I’m fine, I’m fine, I’m fine.” The song begins to grow and grow, with bubbly and minimalist beats, and an electric piano that becomes the anchor. There’s nothing’s simpler and more true: “You’re here, I’m here, now.”

The mix is ​​boiling again: Afro-Caribbean rhythmic trances, Yoruba chants, elements of soul and hip hop, and more given the creativity of artist, Otura Mun, otherwise known as ÌFÉ. In this magical and mystical world, things aren’t said as they are supposed to be read. For example, his 2017’s debut album: IIII+IIII is pronounced Edgy-Og-Bay. Now the new album’s title is 0000+0000, which is pronounced Yay-koon May-yee. It’s a prophetic sign from the Ifá religious practice, this time heralding the birth of night and a fearless embrace of death.

The first single is titled “Fake Blood” and features Paris-based Congolese artist, Robby The Lord. The song was initially inspired by the United States’ reaction to the mass shooting that happened in Las Vegas a few years back. “Gun violence is so rampant and mass shootings so common that the reaction to each new shooting seems somehow more bizarre and absurd than the last,” Mun said. “The solution to the problem is obvious – yet nothing will change because the political discourse is devoid of any real honesty or sense of personal responsibility for the horrors we have created past and present.” Enjoy the video performance of “Fake Blood” by Otura and his band, filmed in New Orleans.

The times we live in urge us to work remotely. This is how “La Trampa” has been made. From Mexico City, the singer-songwriter Pahua (aka Pau Sotomayor) worked with Paris-based multi-instrumentalist La Dame Blanche (aka Yaite Ramos). The result is a song for two voices, between the organic melody and the accurate rap, with a message of empowered women. The song builds little by little with the help of a nostalgic guitar, a beat that flirts with trap, and a flute arrangement that confirms Yaite’s signature.

“Sometimes we wear ourselves out to make someone else happy. ‘La Trampa’ is a reflection on the matter; a call to do the things we want without fear of anyone or anything,” Pahua says about this brand new single. La Dame Blanche, whose latest single & COLORS session “Veneno” continues to buzz around the globe, adds: “This single is very important to me, I feel like it has a generosity that feeds the soul with music. It’s called ‘La Trampa’ (the trap) because it talks about things that are sometimes right in front of our nose and we don’t realize it, but we have to recognize and react to them.”

Until not long ago, Trinidad Riveros, otherwise known as Princesa Alba, was the greatest female artist of the Chilean trap scene. However, in her latest singles, one might detect a turn towards danceable pop. Her debut album, Besitos, Cuídate, released just a couple of days ago, where we first heard this colorful and catchy song, narcisa. With an infectious tropical house beat and an enchanting vocal input from Brazilian star Duda Beat, this song simply can’t fail.

How really narcissistic is a girl who just wants to put on makeup and dress as she pleases, to captivate all eyes, without fear and without blame? Princess Alba makes it clear in this song: she doesn’t want to fall in love with anyone, because she’s in love with herself. “Narcisa” proposes a familiar and empowering message about self-esteem, with the entire album speaking to sisterhood, self-love and women empowerment.

Amidst the pandemic, Martox created a song called “Pausa.” It seems to us that the reasoning behind the song was to generate feel-good vibes in unprecedented times. We can imagine ourselves poolside, as an irresistible cocktail of funky house and nu-disco come to life. This super contagious track has everything it takes to put this emerging Dominican duo in the spotlight. Correctly, the chose this as the first single off of their upcoming EP, following three other songs that made music-lovers talk this year (“Gucci”, “Un Bolero” and “Mente”).

“We want people to get physical and move. This song does that,” says vocalist Juan Miguel Martínez and producer Eduardo Baldera. The two have been friends since childhood and musical partners at Martox. “Pausa” leads a collection of good-vibes songs, alongside tracks like “Debajo Del Sol” and “Verano Pasajero”. The electronic impact, accentuated by a highly danceable beat and a groovy synth bass, flows seamlessly with the featuring of Gian Rojas (guitarist and vocalist of the Santo Domingo band, Solo Fernández).

Let’s be honest, when someone talks about Brazil, the first things we think of are its beaches, its carnival spirit, and the joy of its people. This song somehow condenses all of that into one, beautiful song. “Meu Xodó” is above all a redemption song. It’s the music that 26-year-old Fran wrote for Preta, her 46-year-old mother. With a typical Bahian cadence, like the afoxé, and the allure of Afro-Brazilian rhythms, both sing a melody that spreads sweetness to the wind.

“Meu Xodó”, which means “My Darling”, is not just another single, but the first one released together by the daughter and grandson of Gilberto Gil. Along with Fran – who began his solo career last year with the album Raiz – were three of today’s most respected Brazilian producers: Pablo Bispo, Ruxell and Sérgio Santos. It was born out of need – that of clinging to family love to overcome the bitterness of the pandemic. “This song came as a lifeline. And it’s very symbolic that it happened through Fran, my son, because he saw that I was sad, paralyzed, unable to connect with the music,” says Preta about this emotional rescue.

The mangrove – or mangle – is a shrub with very long stems and branches, which gives life to the mangroves. This plant life plays a part in a unique ecosystem of intertidal zones and mostly tropical climates. Something from that landscape waves into this beautiful song by Maréh, woven only with acoustic guitars, subtle percussion and a few lost background notes that could come from a piano. Of course, the most important thing is the voices, which flows like a river, entangling towards the end, just like the mouth of the sea.

We shouldn’t be surprised by the constant progress Federico Galvis’s career makes. You may also known him as Maréh. Even the great Rubén Blades took care to recommend him, describing him as “a young and talented Colombian singer-songwriter.” Originally from Cali, like his friend Catalina García from the band Monsieur Periné, he recorded his first songs on an album that came out in 2018 under the name Amuleto. A curious fun-fact: besides singing, writing songs and playing different instruments, Maréh is an anthropologist.

“I’ve Got Soul” is the perfect song to put in the car for a ride as dusk falls. It has a bright, guitar-first mid-tempo track, (typical of the late sixties) and a warm and sweet post-doo-wop sound. This magical combination came from the musical imagination of Adrian Quesada, mostly known as the guitarist and mentor for the Black Pumas. Here, he takes the role of producer and conductor, with the help of voice from Tejano singer, David Marez.

“Texas soul to me is a unique Texas take on what we know as soul music, in a way that could have only happened in this state. You had this melting pot of black, brown, white; and you had proximity to the Mexican border adding influence,” Adrian says about his exciting side project. The Latin Shade of Texas Soul is an ensemble that gathers talent on the loose and celebrates the rich, yet under-examined legacy of a specific musical outpost. Just a few days ago the album Look At My Soul came out, supported by this majestic single.