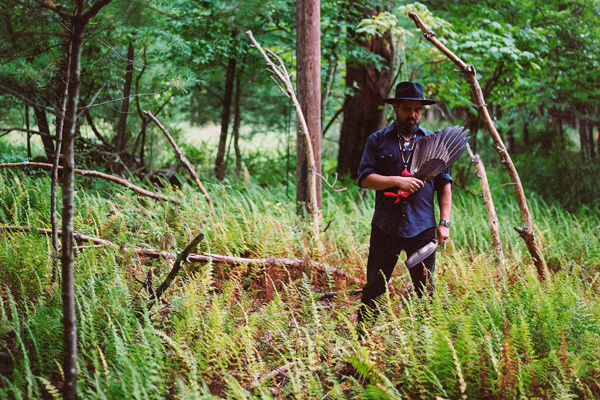 Tigre Radar: Take a Trip Through the Groovy, Jazz-Funk Universe of Cochemea

Soul, Funk, Afro-Latin Jazz – check, check and check. The critically acclaimed multi-instrumentalist and composer Cochemea – long-time sax player for Sharon Jones & the Dap-Kings and whose collaborations include Amy Winehouse, Quincy Jones and Public Enemy – makes some of the most beautiful, emotive and novelty music we’ve heard in a long time. His inventive approach to music – combining melodic percussion with dreamy saxophone – attests to the timelessness of Soul, Funk and Jazz music.

Born in San Diego to Native American musicians, Cochemea Gastelum inherited Yaqui and Mescalero Apache Indian ancestry, although he struggled to deeply connect with his roots until later in his adolescence. When Cochemea’s father passed away when he was young, it left him feeling disconnected from a large part of his Native American background and traditions. But the musical spirit of his father lived on, catalyzing Cochemea’s adventures in music from a young age and later inspiring him to reconnect with his roots through music.

It was Cochemea’s discovery of the Afro-Cuban jazz player Sabu Martinez’ 1973 album Afro Temple, that made him realize that the combination of percussion and saxophone were the perfect means to express his feelings and curiosities towards his ancestral background.

He released his first solo album in 2010, The Electric Sound of Johnny Arrow, which quickly gained critical acclaim for its fresh and psychedelic melodies of Ethiopian Funk, Afrobeat, and Boogaloo created through Cochemea’s overdubbing of an array of different instruments and use of 20 other musicians’ musical finesses. His second solo album released in 2019, All My Relations, includes ten deeply personal songs fusing Jazz and Soul with indigenous Native American rhythms, inviting listeners along on his spiritual journey to discover his roots.

His latest single, “Chito’s Song”, that just dropped in May of this year, is a sultry, rhythmic and cool rendition that has once again shown a different side of the multi-faceted musician. It’s without a doubt that the defining characteristic of all of Cochemea’s music is his otherworldly saxophone playing highlighted by mesmerizing congas, bongos, tablas, dhols, and shekeres.

With his saxophone playing being described as “crisp, lethal and adventurous,” once you enter Cochemea’s colorful universe of Jazz, Funk and Soul, it will be a place you never want to leave.