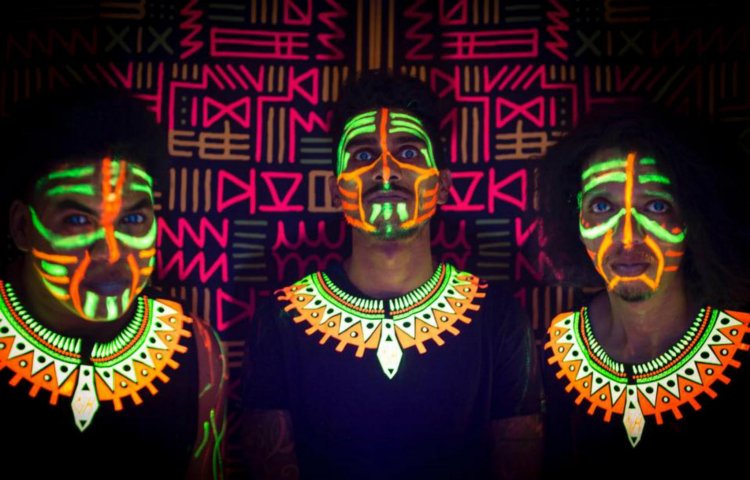 Considered one of the most important groups to come out of Colombia, Ghetto Kumbé’s unique sound – blending the old with the new – has made them some of the best ambassadors of the burgeoning international Afro-Electronic scene.

Colombia. As breathtaking as it is complex, is one of the most geographically and biologically diverse regions of the world and home to an abundance of cultures and ethnicities – as well as a very tumultuous past. Enduring over half a century of violence and civil war – from government corruption to the gorilla and paramilitary groups to the drug cartels – and being faced with new challenges each year such as the Venezuelan refugee crisis, Colombia is no stranger to adversity. However, despite these immense hardships, the Colombian people have continued to push forward and actively take a stand against the corruption, oppression and violence that has been their reality for so many years. Some of the best retrospections of these shared experiences have been propagated through the country’s rich art forms – including of course, its music.

One of Colombia’s most beloved musical creations – Ghetto Kumbé – has taken music with a meaning to a whole other level, successfully propelling their powerful messages to the international music space with their incredible instrumentation as the perfect vessel. Whether you speak Spanish or not is irrelevant; the powerful drums, skillful electronics and hypnotic vocals are more than enough to keep your attention. And if you do speak Spanish, you will understand just how deeply profound their music really is.

The product of curiosity and discontent, Ghetto Kumbé is the fruitful collaboration between three tremendously skilled musicians – Edgardo Garcés (aka E Guajiro), Juan Carlos Puello (aka El Chongo), and Andrés Mercado (aka Doctor Keyta) – and their exploration into the roots of Afro-Colombian music. Although each was born and raised in different parts of Colombia’s Caribbean coast, their upbringings shared a number of elements with violence, racism, poverty and government corruption being an inextricable part of their daily lives.

In need of a way to process these traumatic experiences, music offered an excellent reprieve resulting in each member experimenting with music from a young age. Flash forward to their adulthood and each member had not only mastered a different musical instrument but learned that music is one of the most powerful methods to bring about change. It’s on these past shared traumas and desires to disrupt the status quo that Ghetto Kumbé was born.

In the six years since the groups’ inception, they have gone from being a local Colombian group primarily playing small club gigs and parties to international tours opening for Radio Head and performing on Boiler Room. With two previous EPs under their belts – Kumbé and Soy Selva – their latest self-titled album that was released at the end of July is arguably their most innovative and profound music yet, shining the spotlight on important issues not only affecting Colombians, but many people around the world. As succinctly described by their ultra-cool Buenos Aires based label, ZZK Records, the album was inspired by the different revolutionary movements emerging all over the world, denouncing the inequalities and abuses imposed by corrupt governments while encouraging listeners to join the fight.

Like coordinates on a map, the various instruments define the journey – the gaita, ancestral chants and more hand drums than you ever knew existed – are mixed seamlessly with the trio’s punchy electronic tech-house rhythms, making it ideal listening for everything from your evening jog to having the ultimate dancefloor moment. The exceptional production can be partly attributed to the album’s co-producer, Oliver Williams aka The Busy Twist, who adds his personal UK bass scene touch to the afro-futuristic sounds of the three Colombians.

Upon listening to a few songs, it becomes clear that drums form the foundation of the groups unique sound as Edgardo explains “the drum is at the center of everything. The drum can heal all wounds.” It was Juan and Andrés’ curiosity surrounding percussions and rhythms of West Africa that led the musicians on a path of discovery and instilling in them the importance of honoring traditional rhythms in a contemporary way. “I think what makes us different,” Edgardo explains, “is that we’re going further back to the rhythmic roots, back to where the rhythm that exists in Colombia came from, mostly from the Atlantic coast. In the process of trying to find the similarities between different rhythms, we really took stock of the fact that so much of it comes from Africa and decided that we’d move more towards the African elements, adding them to the Afro-Colombia part. All this means it [our music] has a different sound.”

Through their unique sound, passionate lyrics and fierce instrumentation, Ghetto Kumbé has made being aware of our lives, societies and politics cool again while reaffirming the role traditional sounds have in the present. It’s their dedication to bringing about positive change and their innate ability to blend traditional instruments with modern sounds that makes their music so magical, while serving as an informal education into Colombia’s rich musical history. As explained by Andrés, “fusion trends help to keep folk music alive because people listen to it and start to wonder and ask questions about where the various elements come from.”