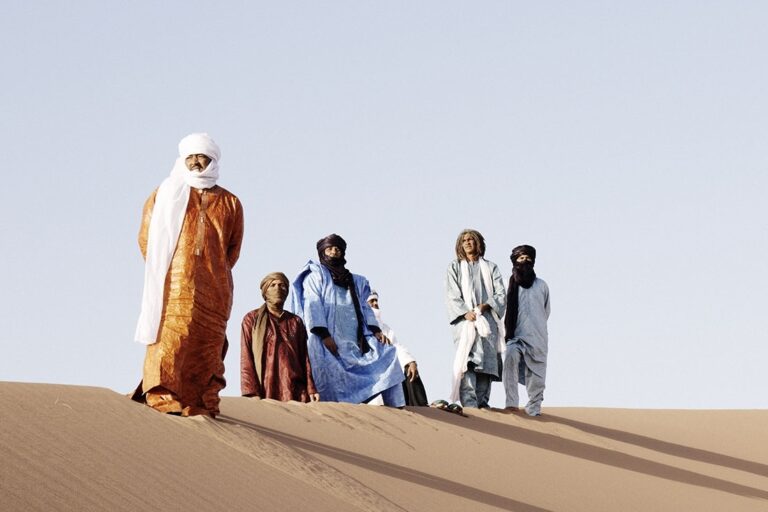 Desert Blues: A Musical Journey Through the Tuareg Culture

Nomads, by tradition, move around the Sahara region in northwest Africa, through the Sahel, to the Niger River. They wear tunics, turbans, veils, and other loose clothing to let air flow underneath, while still protecting them from the relentless desert sun. The history of the Tuareg people spans centuries of migration, miscegenation, and cultural mixtures. All of this, of course, explains the rise of musical expressions such as Tishoumaren or Assouf, known as “desert blues”, a magical fusion of rock instrumentation and regional roots – Tuareg, Malian, and North African music.

If we’re going to get into the desert blues, we have to start with its pioneers. Tinariwen’s origins date back to 1979 when Ibrahim Ag Alhabib formed a band to play at parties and weddings. They had no official name, but people began to call them Kel Tinariwen (“The Desert Boys”). During his childhood, which he spent between refugee camps and exile neighborhoods in Algeria and Libya, Ibrahim saw a western movie in which a cowboy played the guitar. He then built his first guitar out of a stick, a plastic water can, and some fishing line.

The Radio Tisdas Sessions came out in 2001 and was Tinariwen’s first official album, allowing the group to start touring in Europe. The following albums Amassakoul (2004) and Aman Iman (2007) gave them international recognition, adding stars such as Carlos Santana, Robert Plant, U2, Radiohead, and Brian Eno. In 2011, they released Tassili, their fifth album, which included guest appearances from The Dirty Dozen Brass Band, TV on the Radio, and Wilco guitarist Nels Cline. That same year they won a Grammy Award for “Best World Music Album”. Amadjar, from 2019, is their latest record.

Omara “Bombino” Moctar was born in a camp near Agadez, Niger. When he was 10 years old, after the outbreak of the Tuareg rebellion in 1990, he and his family were forced to flee to Algeria in search of safety. It was around that time that a guitar came into his hands. At the age of 17, he returned to his hometown and began his career as a professional musician. Ten years later, in 2007, the Seattle-based Sublime Frequencies label released the introductory album, Group Bombino – Guitars from Agadez, vol. 2.

Also in 2007, the social situation in Niger exploded again and Bombino was forced into exile in Burkina Faso. He was only able to return in 2010 for a concert that was documented in the film Agadez, the Music and the Rebellion. His story and his talent began to spread, to the point of getting The Black Keys’ Dan Auerbach involved in the role of producer for Nomad (2013). Other significant albums followed, such as Azel (2016) and Deran (2018), in addition to some collaborations from Residente to Los Espíritus.

The story of Mahamadou Souleymane, better known as Mdou Moctar, isn’t very different from that of his peers: he was born and raised in villages near the Azawagh desert, in northern Niger, as part of the Tuareg nomadic communities. “My parents didn’t have the means to buy me an instrument and wouldn’t have done so,” he told The Guardian. “I never told them I wanted to play the guitar, I didn’t dare. So I made one.” And so he did, starting with a piece of wood and using brake cables from an old bicycle as strings.

Moctar recorded his first album, Anar, in Sokoto, Nigeria in 2008, when he was being influenced by Hausa music. While some of those songs became popular throughout the Sahel, it was only in 2014 that the record was officially released, with a coveted vinyl edition and a European tour. By his fifth studio album, Ilana: The Creator (2019), Mdou was already recording with a full band and receiving critical acclaim (such as “the most fiery psych-rock of the 21st century” or “the best psychedelic rock albums of the 2010s”). Last year he made waves again with his acclaimed album Afrique Victime, released by Matador Records.

Originally from the Kidal region, a city in northern Mali, the members of Tamikrest studied music in a small oasis in the middle of the desert as part of a school program in a rural Saharan commune called Tinzaouaten. The band was formed in 2006 and part of its initial repertoire included songs by Tinariwen, an unavoidable reference in the mixture of African traditional music with blues and western rock music. They soon adopted an identity of their own, based on the songs written by their frontman, Ousmane Ag Mossa.

The name Tamikrest has several meanings in the Tamashek macrolanguage: union, alliance, crossing, future. They recorded his debut album, Adagh, in 2010, produced by his friend Chris Eckman (a member of Dirtmusic and The Walkabouts). To date, Tamikrest has amassed six studio albums, all released by German label, Glitterhouse Records. They definitely represent the next generation of Tuareg rock.

Imarhan also stands out among the new faces of Tuareg music. They were formed in 2006, just like Tamikrest, but they come from Tamanrasset in Southern Algeria. The name of the band means more than just a word: “those who love each other, rub shoulders and are sincere”. They became known with their albums, Imarhan (2016) and Temet (2018), both released by the German record label, City Slang. Initially a sextet, then a quintet, they’ve just announced the release of a brand new album, Aboogi, supported by a European tour.

Promoted by the advance single “Achinkad”, it’s the first album that Imarhan records in their homeland, in a studio they built themselves. “A new collective space they had established, as well as the resilience of their culture and people,” they announce in their press release. “Aboogi reflects the colors of Tamanrasset, what we experience in everyday life,” says bandleader Sadam. “We give space to the wind and the natural energies, to the sun and the sand. We want to express their colors through music.”