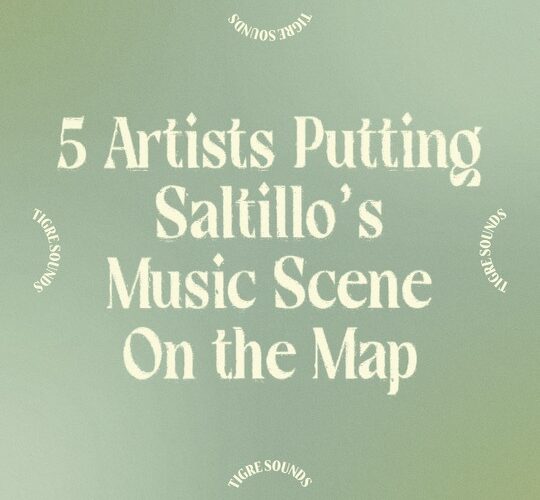 Saltillo is a small city, just an hour away from Monterrey – one of Mexico’s economic and musical capitals (i.e. home of Cumbia Rebajada, Celso Piña, to name a few). Because of the its closeness to the big metropolis, Saltillo’s local scene tends to go unnoticed by mainstream media, as its artists leave their home town in search of better opportunities next door.

However, in the past couple of years, there’s been a steady flow of projects coming from this small city, ultimately creating some of the most interesting music in Mexico. As the city’s musical credibility and demand grows, we may soon be talking about “the new Saltillo wave.” Here, we’ve rounded up some of our favourite artists from the Saltillo scene, giving you a fresh, first look into the magic of this northern city. The following list goes all the way from Neo RnB, to tropical indie guitars, internationalist afrobeat and LatinArab leftfield electronics. Enjoy the ride.

Girl Ultra and Immasoul showed that the Mexican audience was ready for a new generation of Nu RnB stars and Noa Sainz seems to be the next poster girl for the genre. Just over 20 years old, her sound is an electric style that combines Neo RnB elements with a touch of dreamy lo-fi hip hop. It’s a sound that appeals to a wider audience, outside of the genre’s niche.

Following that same Neo RnB vibe, Bolishe One is an artist that creates what we like to call refreshing beach music, perfect for a sunny day with friends under the heat of the sun. His signature sound seems to be one that combines RnB voice antics, small hints of pop urbano autotune, and elements of groove and synth lines. His video “Quiero Saber” is a great proof of his unique positioning. In the video, we love the contrast of hearing these funky sounds, while simultaneously watching unexpected Trocka scenes.

Across the Mexican landscape you can find many indie bands and artists inspired by Little Jesus’s music. Of all of them, Pjama might be the band that pays the most loyal tribute to LJ’s early tropi pop sound. However, by using the ukulele at the core of their songwriting process, their music takes on a particular nostalgia that makes it feel closer to euphoric folk rock anthems, such as Morat’s, “Como te atreves”, or Mumford and Sons, “I Will Wait”.

This past year, Coco María became one of the most recognizable names in Worldwide FM. Holding a pristine time slot, her sounds have reached many during the height of the pandemic. This vinyl-only Dj is known for her amazing taste, digging up some of the most unexpected sounds from pan-latin. Most recently, she’s been developing a career as an artist as well, putting vocals on tracks with Daniel Haksman and Dengue Dengue Dengue! Her latest single “Me Veo Volar” is part of an amazing compilation she recently curated for Bongo Joe Records. “Club Coco” includes some of the most respected names of internationalist cumbia, including Frente Cumbiero, Malphino, La Perla and many more.

Daughter of Palestinean parents, Loris brings a refreshing Arabian vibe to the alternative electronic scene of Mexico, where unexpected bass sounds clash with the traditional African instrument, darboukas. You’ll also notice subtle references to cumbia and champeta. Most recently, she released an EP called “Rastros” via Sietecatorce & Amazondotcom’s label “Subreal” that feels at a mid point between Jonny Greenwood’s Junun soundtrack and Dengue Dengue Dengue’s latest EP for NAAFI. Of course, her sounds are uniquely her own, putting Saltillo’s music scene on the map like all of these other incredible and noteworthy artists. Enjoy!