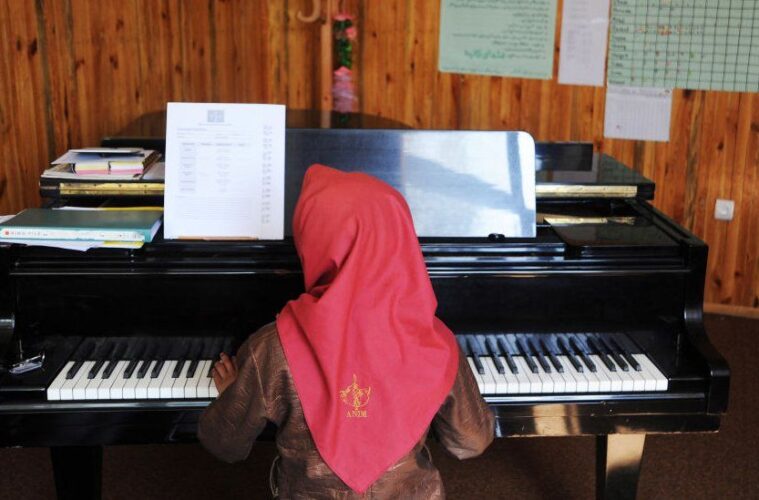 When The Music Stops : What’s Next for Afghan Musicians

Many of us are still trying to piece together what exactly happened this past August in Afghanistan. The withdrawal of US and allied troops from the country is not a surprise, but the abruptness of how it was managed certainly was. Condensing what should have been a months or years-long operation into a few weeks created chaos and uncertainty on unprecedented levels for the Afghan people. It paved a clear path to victory for the Taliban, while plunging the rest of the country into a dark unknown. With the Taliban embodying a notorious hatred for the arts and anything deemed to be a “Western” influence, the world is left wondering what’s next for Afghan musicians?

A Brief History: The Taliban & The Arts

The Taliban emerged in the early 1990s after the withdrawal of Soviet troops from Afghanistan. They quickly gained popularity through their promises to restore peace and security along with the general populations extreme distrust of Burhanuddin Rabbani, the incumbent president at the time. By 1998 the Taliban were in control of 90% of the country.

During their rule they harshly enforced their extreme interpretation of Islamic Sharia law. Not only did this involve civilian massacres, denial of UN food supplies, and the implementation of a scorched earth policy, but it also banned painting, photography, cinema, and musical instruments, as the arts were strongly associated with Western corruption. Women were further oppressed by being denied schooling, entering the workforce, and barred from doing most activities without the consent of a male guardian.

Participating in the arts was a notoriously risky endeavor during this time, with artists being routinely threatened, kidnapped, and killed. The Taliban was not only on a mission to stop the Afghan people from playing music, but they wanted to eliminate the possibility of music entirely – which they did by destroying all the musical instruments they could find. Anyone found with instruments, cassettes or other musical items was subjected to severe punishment and even public execution. TV and radio stations were banned from playing contemporary music and were only permitted to broadcast Taliban chants.

After the September 11th attacks on the World Trade Center, the Taliban and Afghanistan landed front and center on the world stage. This resulted in a US-led invasion that removed the Taliban from power before the end of 2001. Not only did this restore some degree of normalcy and security to the daily lives of Afghan people, but it allowed an artistic renaissance to emerge. Centuries-old musical traditions – such as Hindustani classical music – were quickly revived, the younger generations embraced Western music styles such as pop, rock and hip-hop, and women no longer feared for their lives when participating in the arts or pursuing an education.

The new democratic framework revived the artistic sector after years of oppression. Afghan musicians were slowly forming new bands and orchestras – including the famous all-female orchestra Zohra – and new platforms for musical exploration emerged such as the reality TV show Afghan Star, to a plethora of concerts and festivals covering numerous musical genres. The scene was steadily evolving, fusing traditional Afghan music with Western sounds, and provided fertile ground for new musicians to emerge. This also had a trickle-down effect throughout the music industry, with promotors, recording studios, sound engineers and producers all gaining opportunities to expand their technical expertise, and radio stations eagerly airing all of the new musical gems.

Expat Travis Beard moved to Afghanistan in 2006 and founded Sound Central Festival which ran for 3 years. “It was a really good experience for both the Afghan band and the bands we brought in from overseas. They could share stages together, they could share their music and then the audience got exposed to different genres of music,” which Travis documented his 2018 film Rockabul.

This was also when the renowned Afghanistan National Institute of Music (ANIM) first opened its doors. Founded by Dr. Ahmad Sarmast, the Kabul-based school thrived for over a decade and gained international notoriety for bringing music back to the classroom after the Taliban’s strict rule between 1996-2001. It was a trailblazing establishment in many ways: girls and boys were taught in the same classes, students practiced both Afghan and Western classical music, and at-risk children were encouraged to attend, resulting in many graduates being the first members of their families to receive a formal education. Because of Dr. Sarmast’s dedication, ANIM represents a huge success story in Afghanistan’s musical revival.

But unfortunately, the Taliban still lurked in the shadows. They undertook a number of suicide bombings including one on a French cultural center in Kabul and another during an ANIM musical performance. Musicians throughout the country were served with a harrowing reminder that even without the Taliban officially in power, continuing their artistic endeavors would come with significant risk.

Despite concerns from Afghan officials over the country’s vulnerability to the Taliban without international support, the US announced in April 2021 that all American forces would leave Afghanistan by September 2021. On August 15th the Taliban capitalized on this opportunity and swiftly regained control of the country. Just like that, 20-years of progress came to a complete halt, along with the hopes and dreams of the Afghan people, plunging them back into a life of terror and insecurity. According to Dr. Sarmast, past experience suggests the Taliban’s harsh stance on human rights and intolerance for arts and music should be expected. “It is a time of devastation of our dreams, of hope, of inspiration for the future. The students are very fearful about their future – not just of their education and their music programme, but also about their life. They do not feel safe in Afghanistan. My top priority right now is safety and security of my students, followed by a willingness to help to ensure that the musical rights of the Afghan people are intact, and that the children and youth of Afghanistan have access to a music education program in the country, regardless of their gender.”

The artistic resurgence that slowly began to blossom over the past 20-years has swiftly come to an end, leading many to wonder what the future holds for the rich Afghan culture and traditions that are oppressed under the Taliban. As Dr. Sarmast explains, “music is not just a type of entertainment. It’s not just an art, it’s a powerful force to help Afghans heal from the years of civil war.” But with the Taliban’s recent takeover, this healing process has once again been interrupted.

What About the Artists in Afghanistan?

The consensus is clear. Under Taliban rule, Afghanistan is not safe for artists, whether they are creating now or were creating during the previous 20 years – especially for those from marginalized communities such as women and religious minorities. As a result of the Taliban takeover, many artists have been forced into hiding, scrambling to take their work down from the internet and other public spaces, avoiding interviews, dismantling their studio spaces and doing whatever else they can to conceal their identities out of fear of execution. All music events and concerts have been cancelled and Afghan music companies have gone bankrupt almost overnight. “I’m hearing a lot of panic, fear, resurgence of the PTSD of the people who have lived through Taliban time before,” explains Afghan artist Shamayel Pawthkhameh Shalizi “It’s perceived by the Afghans as regression to a time that they never thought would come back again.”

Other artists are continuing to create as a form of resistance, performing music or making graffiti throughout the cities one last time before going into hiding. The doors of ANIM have been closed as students fear the consequences if they return. Most students have abandoned their instruments, as they deemed this safer than having them at home. If the Taliban catches them with their instruments, they will surely face persecution. Numerous reports have surfaced detailing the Taliban destroying any instruments they find when people drive through checkpoints.

When it was reported that the Taliban dragged folk musician Fawad Andarabi from his home and executed him, it exacerbated many musicians’ fears including one of Kabul’s longest running rock bands, Faisal. “Every day, we message and call each other. All our members are in a safe place, but we can’t perform. We can’t work. We can’t practice. We don’t know what will happen with our instruments. We don’t know if the Taliban has found them or not.”

What’s Next for Afghan Musicians?

Considering that artists are one of the most at-risk groups, many are urgently trying to leave the country. Flights out – even for those who assisted allied forces – are looking grim and the land routes involve border crossings into Pakistan, Uzbekistan, Tajikistan or Iran, which are notoriously dangerous and difficult to be accepted into. One artist who managed to leave is the country’s leading pop star Aryana Sayeed, who was also a judge on The Voice of Afghanistan. She narrowly escaped the day the Taliban took over Kabul, “I had to survive and be the voice for other women in Afghanistan. The Taliban are not friends of Afghanistan, they are our enemies. Only enemies would want to destroy your history and your music.”

Given the unlikeliness of safe evacuation for the majority of those wishing to leave, many have shifted their focus to preparing for the long term. What can be done to sustain those forced into hiding for months? What other options exist to get people to safety? Are there any possibilities to speed up paperwork processing and assist those who did make it to other countries?

Despite these challenges, there are still some organizations that are working to get musicians out. One such organization – Save Afghan Musicians –  was founded by Travis and has set up a database of musicians in the country, already having helped over 20 musicians and their families leave Afghanistan. Through tremendous efforts and financing largely provided by a crowdfunding page he set up, Travis has been able to secure a number of musicians with passports, visas and waiting list spots on flight lists.

ANIM’s staff and students also eagerly await to hear what’s next, and Dr. Sarmast said that despite these challenges they should not give up their hopes for pursuing music: “To my fellow Afghan musicians – do not give up your voices. Sing, play, continue to do what you’ve been doing. And to the international music community – stand in solidarity with the music and musicians of Afghanistan.“ He also emphasized the need for the international community to continuously monitor the situation and intervene should the Taliban once again violate human rights.

It’s without a doubt that Afghanistan is not the same as it was in 2001 when the Taliban’s initial reign came to an end. The past 20 years have seen tremendous progress in regards to the arts, music, education and women rights, allowing Afghanistan’s culture to blossom. The question is now, how much of this progress will remain.