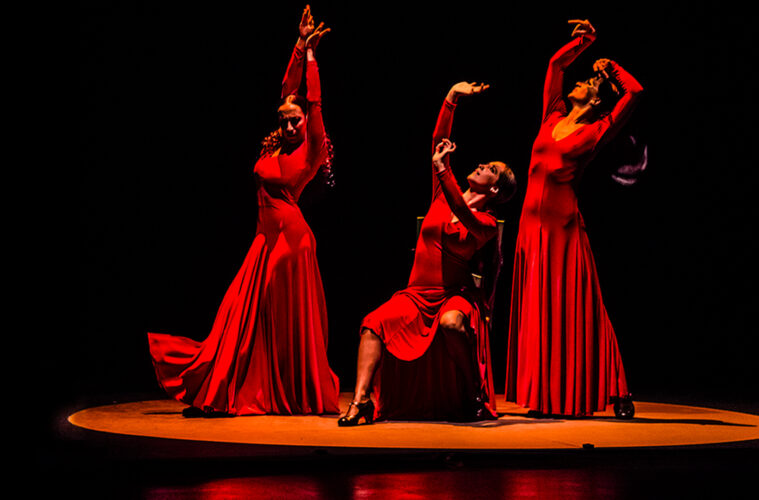 How Spanish Flamenco is Reinventing Itself

If someone were to ask you what comes to mind when asked about flamenco, most of us would probably think of bright colors and frilly dresses, bold and defined movements, enough clapping and foot tapping to draw a crowd, and masterful guitar playing and clicking castanets (perhaps the most quintessentially Spanish sound there is).

But the true essence of this art form is much more profound, originating with the Andalusian Romanies of Southern Spain in the 18th century as a way to express the legends and struggles of daily life and reflect the experiences of being an outcast subculture existing within a predominately white, Christian Spain. Fast forward to the present, where this iconic art form is being reinvented, with a bold new wave of artists breathing new life and meaning into this archaic Spanish treasure, reminding us of its continued relevance in the modern age – and we are intrigued to say the least.

The first to catch our attention was the vivacious and resourceful young Spaniard Miguel Fernández Ribas – otherwise known as El Yiyo aka the Michael Jackson of flamenco dancing. At just 24 years old, El Yiyo has already become known as one of the foremost contemporary boundary pushers in the scene by fusing traditional flamenco moves with other dance styles (El Thriller anyone). Daring to challenge the traditional status quo is impressive given that ever since the first café cantante opened its doors over 150 years ago, a fierce debate has been raging in Spain as to what constitutes real flamenco, making anyone brave enough to modernize the genre subject to harsh criticism. As a completely self-taught dancer, attributing the majority of what he learned to YouTube, his passion and individual style inspires and reminds us of the importance of doing what we love with our own personal flair opposed to doing things exactly by the book. “I can dance classical flamenco, if that is what I am asked to do. But I want my dancing to be more open. I want to be inspired by anybody who can help me dance better, whether it is Michael Jackson, or a kid on my street trying out some neat little move…flamenco is really about letting all the sensations flow through your veins.”

Speaking of personal flair, few do it better than the “Queen of the Spanish Moonwalk” – renowned flamenco superstar and choreographer Sara Baras who has played an instrumental role in bringing her reinvigorated vision of flamenco traditions to larger audiences. With her own company – Ballet Flamenco Sara Baras – she has given performances in distinguished theaters around the world including the legendary Théâtre des Champs Elysées in Paris. At first, many people were concerned she would betray the tradition by performing in large theaters… until they actually saw her perform, “There were people who insisted that we couldn’t dance flamenco with all of these lights in a large theatre, only in small places. Apparently, they’ve now changed their minds.” Sara’s performances both honor flamenco traditions while giving them a contemporary update, notably her challenging of classic gender roles in the trademark style of La Farruca, which is traditionally performed only by men (yes girl, yes!) with the New York City Center calling her performances “A tour de force of female power and transcendence.”

In addition to challenging cultural status quos and gender roles, surprise surprise, flamenco has also long been one of the go-to methods used by Spaniards to speak out in political protest. The onset of Spain’s economic crisis provided an ideal opportunity for flamenco to re-enter the public spotlight and reconnect with its original mission of expressing the plight of local citizens and bringing social awareness to those in positions of power. If you have any friends living in Spain, just ask them if the name Flo6x8 rings a bell, as they are the flamenco-flash-mob group that is largely accredited with re-politicizing modern day flamenco – and making some rather memorable experiences at the neighborhood bank. Throughout the COVID pandemic, flamenco has also been used a catalyst for social change and a means to protest for the rights of performers and artists in the cultural sector.

Whether you enjoy it for its enchanting beauty or meaningful purpose, the magic of flamenco has proven to withstand the trials that time and a changing society have bestowed upon it, reinventing itself and those who experience it each time.