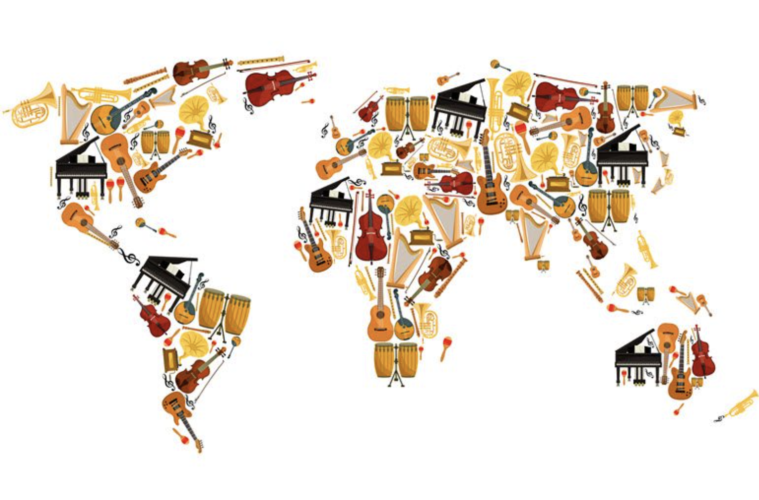 For an art form that has existed as long as humanity itself, it’s surprising to learn that the majority of the music that is marketed to us today only represents a sliver of what is actually out there. Moreover, the sliver that is presented to us has generally been heavily filtered through the Anglo-male lens, resulting in significant underrepresentation of many artists and genres across the world.

As one of the most beautiful and interactive ways for us to express and communicate with each other, it’s in our best interest to explore the rich sonic universe that exists beyond what’s being released by the major labels and mainstream music charts. Let’s get curious and not settle for what’s immediately presented to us. With globalization and the internet making music from across the world more accessible than ever before, times are changing and here are 5 trends we’d love to see.

WTF is “World Music” & Why This Term is Not Serving Anyone

There’s so much to be said about this overgeneralizing and condescending term that it’s hard to know where to start. But a good place is one of the most famous and eloquently stated roasts made by Talking Heads frontman David Byrne in his article for the New York Times I Hate World Music. Perhaps one of the most important things to understand about the term “world music” is that “It’s a none too subtle way of reasserting the hegemony of Western pop culture. It ghettoises most of the world’s music. A bold and audacious move, White Man!” By lumping entire musical genres into this category, it effectively separates art from the artists who create it. It puts distance between music from other countries and the people who consume it, reinforcing that anything in this “other” category is less evolved than music being created in the West.

The term “world music” dates back to the early 1960s, when American ethnomusicologist Robert E Brown coined the expression in order to describe the musicians he was working with in Asia, Africa and Indonesia – without having to differentiate between them. WTF bro. But it wasn’t until the 1980s that the phrase really took off and became the go to way to describe and market non-Western music. As a result of this blanket classification, music consumers became doomed to a world of ignorant bliss, whereby the music industry ensured that any non-Western music they encountered was only the tip of the iceberg of what music was actually being made around the world.

So instead of trying to overgeneralize and understate the vast diversity of musical styles that exist, let’s call a spade a spade and start referring to music by what genre(s) it is – regardless of where it was made. Whether American pop, French pop, or K-pop – pop is pop. And who better to lead the charge on this front than the original perpetrators themselves – the music sellers and distributors. Bye bye “world music” section. As lovers of music, we must always remember that music from around the world deserves to be properly defined and marketed to fully represent the artists who are creating it.

From the classroom to the recording studio all the way up to the Grammy’s, the gender inequity between male and female artists is disturbingly real. As a result, the majority of the music we hear -regardless of where it was made – overwhelmingly represents the male perspective.

To say the statistics are frightening is an understatement. According to the USC’s latest report on music creator demographics, Inclusion in the Recording Studio, women represent a meager 21.6% of all artists on the Billboard Hot 100 Year-End Charts across the past nine years and represented only 20.2% of artists on the chart in 2020. These numbers indicate that there has been no growth in the number of female artists on the Billboard charts in the past decade. If that’s not scary enough, the proportion of female songwriters and producers is even smaller, with only 12.6% of songwriters and 2.6% of producers on the 2020 chart being female. To make matters worse, when looking at the data from other countries around the world, these percentages are drastically lower. What in the actual F*ck!

How is it possible to have so many talented females on this planet, yet have them be so grossly underrepresented? The answer lies in the patriarchal framework that has dominated our way of life ever since the first hominid left their cave. This glaring gap is certainly not a question of skill but is attributable to the exclusionary dynamic created by the ruling elite of male music executives who statistically prioritize working with their male counterparts, thereby limiting opportunities in all areas for female artists and industry professionals. Additional power dynamics have long been at play resulting in a quasi-normalized climate of harassment, discomfort, and sexism against female artists, leading the reports’ lead researcher Dr. Stacy Smith to conclude “being female is, in and of itself, a barrier facing women navigating the music space.”

So, what can be done to turn the tides on these harrowing numbers? We’ve made it really easy for you by summarizing input from some top female music executives across the industry:

It’s hard to believe that in the past, there was a time when musical genres were never mixed. But just as horticulturists transfer pollen from one plant to another to create a new species, musicians are doing the same with different musical genres across various cultures. Today, the cross-pollination of cultures in the music space has reached an unprecedented level – a trend that we couldn’t be happier about. Mixing and integrating different musical genres is not only a powerful force for creativity but builds community by helping to bridge the gap between distinct cultures, educating listeners along the way.

Wynton Marsalis, the legendary musician and Artistic Director of jazz at the Lincoln Center, explained how the cross-pollination of musical genres has been a critical driving force for racial integration and a means of celebrating diversity for centuries. “Mixing genres is a way to enrich our style, our form, and our technique. While other [countries’] traditions may seek purity and perfection of form, we seek cross-pollination as an important step in achieving a more inclusive and complex musical language. Music genres were only labeled so that the record companies could sell them.” Is there anything cooler than learning tolerance and respect for others through the music we listen to?!

In addition to breaking down cultural barriers, the cross-pollination of different musical genres promotes the continuous evolution of the music space itself, encouraging the creation of fresh and modern styles while paying homage to ancient musical traditions and cultures. Oh, and did we mention, it sounds great too. Perhaps some of the best examples out there today involve mixing electronic production styles with more traditional roots melodies and sounds. Some stellar examples include Colombia’s Ghetto Kumbé where house-beats collide with traditional Afro-Colombian rhythms, the UK’s Busy Twist and his catchy AF vintage African edits, and Viveick Rajagopalan’s incredible hybrid take on Indian hip-hop with the Ta Dhom Project. Let’s keep it coming people!

One of the highlights of 2020 (albeit there were few), was when indigenous-Colombian singer-songwriter Lido Pimienta released her album Miss Colombia, and it actually got the attention it deserved! Aside from topping international charts and receiving critical acclaim, her album propagated the much-needed dialogue surrounding the importance of creating opportunities for indigenous artists in the international music space, while proving it’s possible to disrupt the status quo. But it also highlights how much work still needs to be done.

Music is one of the only surviving elements of indigenous identity following their systemic oppression and cultural genocide under colonial settlers and governments. For years, indigenous artists around the world have been challenging colonial stereotypes through their music, reasserting agency and cultural representation in the mainstream more than ever before, leading to an Indigenous Musical Renaissance. Canada is a great example with artists such as The Halluci Nation, Digging Roots and Anachnid generating international acclaim for their music.

But although Indigenous artists are attracting larger audiences than ever before, the indigenous music industry (Indigenous owned/operated companies) is still in its infancy. This is largely attributable to a number of ongoing systemic issues that create significant barriers to entry for Indigenous artists and music industry professionals, preventing many from fully participating in their country’s music scene. As we previously discussed, many of the challenges female artists and industry professionals face also apply to indigenous communities – i.e., regular subjugation to harassment and discrimination.

On the other side of the world, Australian First-Nations artists Kee’ahn and Bumpy have also voiced their concerns over the continued “blanket grouping” and underrepresentation of indigenous artists and music industry professionals in the mainstream music space. “I think a general feeling being a First Nations woman in this industry right now is the tokenism of it. Like are you in this lineup because of your craft and your art or are you here to tick a box? And I think that’s a really challenging thing at the moment – for us to be seen as more than just Indigenous music; we’re peoples of many crafts and many arts and many sounds.”

If you look at which songs appear on Billboard’s Global 200 chart on any given week, you’ll notice a few common themes: the vast majority of the songs are sung in English (other than a couple of Spanish-language songs spritzed in the mix) and the predominant musical style represented is Anglo-American pop music. This illustrates the all-encompassing problem that has contributed to the four issues we covered above. Think about it. We wouldn’t have coined the term “world music” or discriminate against females, POC, indigenous communities and cultures outside of America if an inherent bias in favor of white American mainstream music didn’t exist. And ever since the Western countries took over as world powers after WWII, this has been the enduring status quo.

But times are starting to change given the fact that we now live in a time where everything our hearts desire can be accessed with the internet. Thanks to online streaming and music discovery platforms, we have more options available to us than ever before to unearth an eternity of music from all over the world, in a range of genres, sung in different languages and created by artists from diverse cultures. With approximately 4.2B people around the world having internet access, only 360M of these people speak English as their first language. So, you know what that means? Increasing demand for a variety of music in different languages, with Spanish, Korean, Indian, and Arabic language songs gaining momentum.

We’re already starting to see Latin artists being embraced by the U.S. mainstream music space and slowly more and more international artists are creeping their way in too. Listeners are starting to turn to Chinese and K-pop music, along with acquiring a renewed interest in African artists thanks to many record labels increasing their investment in creative projects on the continent. The film & TV space is also doing a great job of bringing music from around the world to the mainstream. Netflix, for example, exponentially increases its international programming each month – the majority of which utilize music from their international settings. Slowly but surely, we’re getting there.