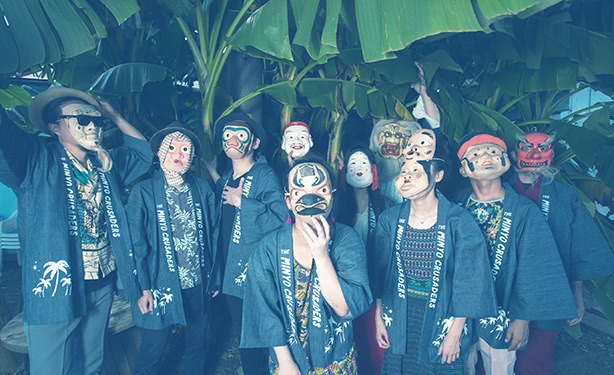 A Quick Guide to Latin Music in Japan

The last time I was blown away by a Latin track in the middle of a cumbia set, one that I couldn’t tell who it was by and wasn’t able to find out via Shazam, was when I heard “Kushimoto Bushi” by Minyo Crusaders from Japan for the first time.

A couple of years ago I was waiting to DJ at Mexico City’s Cafe Paraiso when I heard this song coming out of the speakers. It was a sort of analog cumbia sonidera, but not quite, it had a super catchy brass hook and it was sung in a language that I couldn’t understand. At that moment I rushed to the booth to ask Junf (the opening DJ) about the track and he said an undistinguishable name followed by the promise that he would send it over to me in the morning – it was a promo track he had just received in his email.

Once I got Junf’s email in my inbox and heard the track again I knew there was something very special with this band. A couple of months later Minyo Crusaders’ debut LP was released via Um Mais Discos and it fulfilled all of those expectations and more.

The take on Latin music by this big Japanese band was so solid that it won over the hearts of many Latin music outlets worldwide. They were invited to collaborate with Mario Galeano’s Frente Cumbiero, one of the most respected voices when it comes to cumbia bands that are exploring the furthest frontiers of this sound and yet staying true to the roots of the genre.

Although for many people this might be the first encounter with Latin music coming from Japan, its history goes all the way back to the beginning of the previous century. During the Tiasho Democracy (1912-1930), the government promoted western culture to Japanese elites through ballroom dancing halls, where tango was introduced. During that period of time it was common for European bands to play at Japanese ballrooms. As María de la Peza mentions in “Music and Globalization: The Impact of Latin American Music in Japan”, the French quintet Moulin Rouge Tango Band played for more than three years in the Florida Ballroom, Tokyo’s most important ballroom in the 1930s.

WWII closed the country to foreign culture, but as soon as it was over, the presence of American influences popularized jazz and rumba. After rumba’s moderate introduction, mambo had a bigger success in the late 40’s, allowing labels to organize several tours in Japan for artists such as Pérez Prado and Xavier Cugat, leading to the appearance of local bands dedicating their sound to Latin music, such as the Tokyo Cuban Boys and the Orquesta Típica de Japón.

As the years went by, jazz’s popularity in Japan worked as a vehicle to introduce more and more Latin influences via its Latin jazz variety. Even if many genres from Latin music can be framed as feel good music, its Latin jazz variety had the high level of musicianship skills that it required for becoming a favorite genre amongst local conservatory musicians. This led to tours of musicians such as Frank Gillo (Machito) in the 60’s or Tito Puente in the 70’s, playing in the famous Blue Note jazz club.

A similar process happened with ballroom dancing. Many Latin dances are related to “skin on skin” dancing (i.e. dancing very close together), which is not common in Japanese culture. To overcome this contradiction, people in dancing halls started to see the dance as a high level competition sport, taking it very serious, and thus removing most of its carnal connotations (and along the way the use of dance as a place to exchange culture with Latin America).

According to Rafael Reyes Ruiz in “Music and the (Re)creation of Latino Culture in Japan”, in the 80’s Japan experienced a wave of Latin immigrants which led to the opening of several Latin bars and clubs in Tokyo. It is here that local conservatory musicians started to move from Latin Jazz into effective party music coming from Fania Records. This is the scene where Orquesta de la Luz appeared, playing Fania Records’s inspired salsa exactly as it was supposed to be.

After playing the Latin bar scene for a couple of years and earning a reputation, the band was invited to play in the U.S. in 1990 where they were picked up by producer Ralphie Mercado. With the release of their album Salsa Caliente Desde Japón they became a mainstream hit, touring all around Latin America, and being popular for keeping the harder salsa style alive during a time when salsa romántica was taking over the previous Fania All Stars sound.

Examples such as Orquesta de La Luz and the Tokyo Cuba Boys show that until then Latin music coming from Japan had been mostly played with a very strict approach, trying to follow exactly each of the genre’s guidelines. In this sense, it would be impossible to think of the appearance of a band like Minyo Crusaders, whose sound is fused in equal parts Latin music and local folk/minyo music to create a new musical synthesis. However, this started to change during the late 90’s with the appearance of promoter Shogo Komiyama and the Fuji Rock Festival.

Shogo, a Paraguayan by way of Argentina with Japanese roots and childhood friend of members of Los Fabulosos Cadillacs, travelled to Japan for business during the 90’s. While living there he helped to organize a couple of shows for LFC’s side project Cienfuegos and ever since has been dedicated fully to promoting Latin music acts and mestizo – cumbia culture in Japan.

He also started working for Fuji Rock Festival, where he found support from Jason Mayall, also known as The Cumbia Kid, for programming acts such as Manu Chao, Todos Tus Muertos and Fidel Nadal in the first years of the festival, all the way to acts such as Frente Cumbiero in the past couple of years.

(If you haven’t heard of Cumbia Kid, let me tell you that he is famous for being the friend that introduced Joe Strummer from The Clash and other people in London’s punk scene to Andrés Landero’s Cumbias. I recommend you find out more about him in this nice article by Mario Galeano.)

The visit of Latin artists at Fuji Rock helped to spread the taste for cumbia amongst local artists. A couple of examples include Little Masta, a keyboard player that joined Fidel Nadal’s Fuji Rock performance, and EDK, a band that started in the first half of the 2000’s and that is highly influenced by Manu Chao’s mestizo cumbia style.

Save Children From Nuclear Pollution by Little Masta with Maximum Vibration

Besides festivals, Shogo’s production company Japonicus started to introduce cumbia into the alternative scene by throwing its own nights: Rebel Fiesta Party, Pachamama and Clandestino.  He shared cumbia records with DJs that were also part of the reggae and ska scene such as Satory Fuji, Caribbean Dandy Dj’s or Txako. This fostered the development of a local cumbia scene with bands such as DF7B, Rojo Regalo, Tequila Cokes, Copa Salvo, Real Thing, Mexican Club Band, Los Oxxos Sexos, DJs such as Dj Tagood and even local record stores such as Discos Papkin.

Contrary to the vibe of previous salsa nights, this ecosystem of events promoted an inclusive atmosphere that re-valued local music influences from around the world and didn’t require bands to play Latin music following strict genre guidelines. This was part of the reason why bands from other scenes such as surf rock, punk or ska started to do their own takes on cumbia, first doing covers of Colombian and Peruvian classics and slowly developing their own original songs.

It is from this community of Latin music bands that Minyo Crusaders come from. However, according to the band’s leader Katsumi Tanaka, besides rock and world music, one of the biggest influences for creating the band was Japan’s 2011 earthquake and following nuclear plant disaster in Fukushima. During that emergency, people from different parts of Japan assisted to help at the site putting in evidence the Government’s slow reaction to the disaster. This pushed Tanaka to re-value Japanese culture and pre-liberal Capitalist values. So the combination of being part of a music scene where there was no pressure to play Latin music exactly as it should be, and the interest to revalue local traditions, is how Minyo Crusaders was born.

Now that the cumbia scene has more than 20 years in Japan there is a large ecosystem of artists that are reaching new frontiers of the genre. One example of this is Mumbia y Sus Candelosos, a collective that creates a sort of digital cumbia that starts to move away from the analog cover sound of most of the cumbia bands mentioned before. Another example is Amy Akaoka, a singer previously linked to the mainstream salsa sound of Orquesta de la Luz, but that now is starting to explore cumbia aesthetics. The result is a sound that could well be in the same ballpark as Rossy War’s tecno cumbia.

Additionally, the expansion of cumbia and mestizo influences beyond their niche can be seen in artists like Qymigo. She is a singer who comes from a reggae background, but sharing the stages with bands like EDK is probably the reason some of her tracks such as “夜は味方” present a clear Latin flavor.

To conclude, I would like to include two honorable mentions in this account of Latin music in Japan. One is ETO, the borderline reggaeton in an El Guincho-style project from Ernesto Salinas, a Boricua living in Japan. And Ajate, an African-inspired band from one of the members of Minyo Crusaders that, when looked in detail, also reveals subtle notes of a Latin feel. Both are examples of the new places music in Japan is getting to after cumbia paved the way for pan-Latin artists.