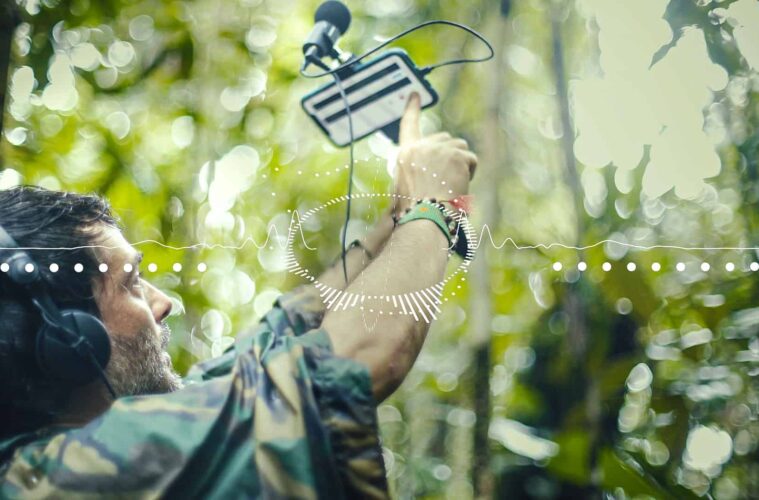 Photo via Stand for Trees

Bomba Estéreo band leader/founder Simón Mejía releases the new documentary film “Sonic Forest” at Youtube tonight at 7 PM EST. The film follows Simon’s journey from the Pacific coast’s Afro-Colombian communities to indigenous mountain towns as he learns about the groups who have united to protect the vast rainforest that connects them, while raising awareness for climate change and biodiversity.

Simon wrote an original score for the film that weaves together field sounds recorded during the visits to the communities fused with electronic production. The film’s primary song is a new Bomba Estereo track which features Monte and the pure folklore of Colombia’s Pacific coast with the renowned singer Nidia Góngora. Góngora has brought her native Timbiquí to the world for over 20 years.

“I am beyond grateful for being invited by the communities to be part of this project,” Simón Mejía says. “Traveling through Colombia is one of the things I enjoy the most, especially when it comes to unknown places that always caught my attention for their music. Now, I am aware that these territories are crucial for the world in environmental matters. There is a lot of natural wealth and conserving the forests protects that wealth and life on the planet. Likewise, giving visibility to the conservation work of the Afro-Colombian and Indigenous community leaders, is one way to combat the excessive violence against them.”

“Sonic Forest,” directed by award-winning directors Josh Thome and Simón Hernández, captures Simon’s experience through powerful and unique videography, along with special recordings of ecosystem sounds and local music. To understand these remote communities, the team made a long journey to live in their villages for several days and to experience firsthand their vulnerabilities, their dreams, and their cultures. These communities have been the guardians of their forests for centuries. But recently, they have come under threat from deforestation and degradation caused by activities from mining to palm oil. Now, alongside the organization Stand For Trees, they are developing new, sustainable economies and receiving essential services, supported with results-based payments for reducing deforestation. The documentary showcases this exciting new solution.

Combining music, film, and environmental action, the “Sonic Forest” film and Stand For Treesplatform bring together three of the issues that Joaquin Phoenix is most passionate about. The actor is known for shining his spotlight on important causes and using his celebrity to provide a platform for voices that deserve to be heard – like those of the indigenous and Afro-Colombian communities featured in “Sonic Forest.” Joaquin Phoenix and director Josh Thome also have a long history collaborating on environmental content and campaigns fusing art, culture, and change.

During filming, the “Sonic Forest” team visited two of eight projects that are jointly collaborating with Stand For Trees under the ‘Pacific Forest Communities umbrella. The first, Macaw Habitat Conservation, located in Mutatá, protects 42,000 hectares of tropical forest and is home to 831 bird species, 195 amphibians, 167 mammals, 210 reptiles and 5,124 plants. The project empowers community leaders through conservation training, and addresses drivers of deforestation by providing local indigenous communities tools to improve forest monitoring, land-use planning, and to develop new sustainable livelihoods including shade-grown cocoa.

The second project, known as Afro-Colombian Mangroves and Forests, is situated in Bajo Calima and La Plata, Bahía Málaga, a vibrant coastal region. The project protects 104,000 hectares of native forest, supports the sustainable economic development of local communities through training and technical assistance in agriculture, fisheries, and ecotourism, and has created new jobs in forest patrolling and scientific research.

“Sonic Forest” follows the recent release of Simón Mejía’s Monte‘s debut ‘Mirla.’ Monte is an ambient electronic project in which Simon furthers his exploration of Colombian nature sounds. Following extensive travel and research, Simón worked to interpret the nature sounds into an electronic music language – which animals sound like a high hat, which ones sound like bass drums and which ones sing the melodies.