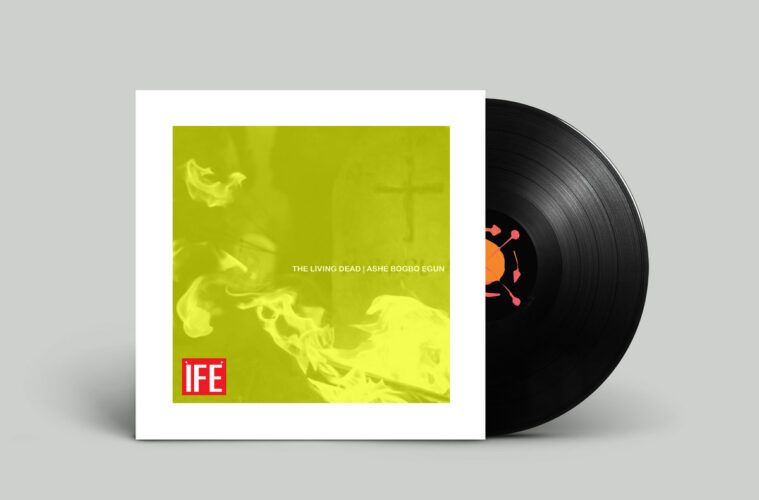 ÌFÉ’s music has always been about creating a spiritual connection with their ancestors through music and inspire other people in the process. In some cases this works to address personal spirituality and search for oneself, in others, it addresses conflicts such as colonialism and freedom.

In their new album, a 3 song EP, ÌFÉ, uses its ritual groove to give themselves and their listeners a healing balm for all the hardships that this 2020 – Covid era year has given the world.

According to the album’s description, for Otura Mun (ÌFÉ’s leader): “One of the things that has helped me confront the difficulty in dealing with the sadness and pain around us is a belief that death in the physical world is not the end” [..] “As part of my daily spiritual practice, I commune with my ancestors. We are all on the same wheel of life at different points. As we approach the end of 2020, I felt that it was important to acknowledge and celebrate those who have passed before us. Ashé Bogbo Egun, ‘power to all deceased.’”

When you press play on the first of the 3 movements that make up the EP (“Music for Egun Movement 1”) the feeling is that of taking a polaroid picture of all that has happened over the past months of 2020. The minimal piano chord progression is key to creating a sense of relief that is not necessarily associated with overcoming the pandemic, but acknowledging the work put into surviving all of its problems so far.

As always, ÌFÉ’s delivery is amazing and irreplaceable. There is not another band in the world that uses autotune with such a fresh and innovative approach, especially when it is laid on top of an Afro-Latinx sort of drum line (remember that Otura Mun has big credentials as a drum line musician) that although groovy, never loses an inch of spirituality to benefit dance floor effectiveness.

Another thing that makes ÌFÉ’s music fantastic is that their futuristic approach to Afro-Latinx music heritage differs from most of the exercises you can find across the world of producers mixing African ritual music and electronics. Their music is not about grabbing ancient samples or melodies and taking them to the world of future electronics (i.e. Clap Clap! or Commodo). On the contrary, they take the electronic drum textures and minimal synth basses of future RnB to recreate ancient African rhythms; and they use that killer autotune technique to emulate the call and response chants of Yoruba traditions.

The second movement on the EP uses all of these elements – minus the piano chords – to generate a different feeling, one that feels more like a quest or a mission. When talking about a previous release, “Bangah (Pico y Palo)”, Otura Mun mentions that in that song he explored the idea of war not in a violent sense, but in being so determined to do something that the only way to stop you searching for it is by being killed. Although “Music for Egun Movement 2” feels less aggressive than “Bangah”, the sense of being on a mission feels strong and can relate to having such a determined quest. Putting the song into the context of a hard 2020, it feels that after healing during the EP’s first Movement we are ready to embark on a new personal mission.

This leads us to the final track of the EP. Here the feeling transmitted is that of being able to see over the hill. In the same way as the previous track, there is no piano chord to anchor the emotions of the song. Instead this is done by an upwards movement in the bass line and subtle futuristic synth stabs filled with reverb that give you chills when they come together. Another important thing about this song is that it includes a small portion of English spoken lyrics (contrary to the Yoruban lyrics of all the rest of the album) which very briefly, almost subconsciously, mention the phrase “what is lost can be found”. This transmits a message of acknowledgement that all of the hardships of this 2020 are not in vain for ÌFÉ as they helped them to walk into a new direction.

Living Dead / Ashé Bogbo Egun arrives at a perfect timing as the year draws closer to its end. Through a musical ritual connection with their ancestors, ÌFÉ uses these 3 tracks to give the listeners a healing balm for all the hardships of 2020