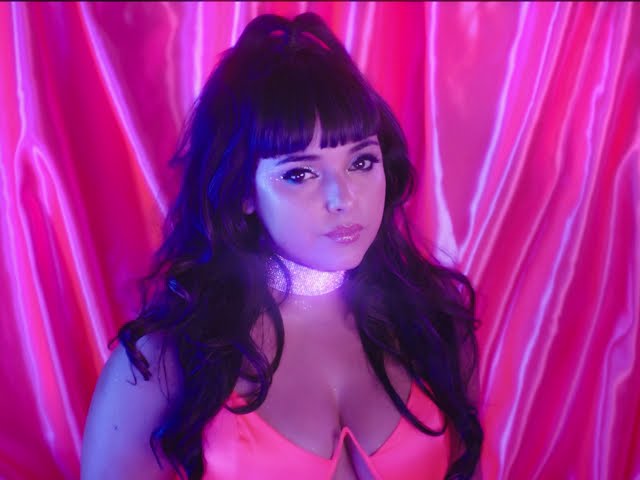 Jarina De Marco: The Dominican Bombshell Lighting It Up

Little do many of us know, that amongst the sandy beaches and picturesque highlands of The Dominican Republic, lies a burgeoning contemporary music scene. One of our favorite musical exports from the island leading the charge and helping to redefine the country’s musical landscape is the one and only, Jarina De Marco.

The Dominican-born bombshell is a true creative force – singing in four languages (English, Spanish, Portuguese and French) and leading all aspects of her musical projects including song writing, production, visual design and direction. Her inherent talent and distinct musical aesthetic has caught the eye of some of the most famous producers on the planet, such as Diplo, who quickly signed her to his label Mad Decent. With a string of releases, an acclaimed EP, and multiple jaw-dropping music videos under her belt, Jarina’s artistic vision has kept our attention every step of the way. And if that isn’t enough, she’s also an activist too.

Born and raised by two musicians, Jarina’s early years were spent traveling through remote parts of the Amazonian rainforest and Dominican countryside where her parents introduced her to indigenous sounds and ways of life – as well as the importance of protecting them. Her parents’ activism and resistance to then brutal dictator, Joaquín Balaguer, forced her family to temporarily relocate to Canada and taught Jarina the significance of standing up for what’s right. It wasn’t until Balaguer’s death when Jarina was 11 years-old that she was able to move back to her native country, equipped with a new perspective that profoundly impacted the woman and artist she is today.

In 2016 when Jarina made her musical debut, she took the opportunity to show the world exactly what kind of woman she really is by using traditional Latin rhythms with electro dance pop beats as the vessel to carry her politically charged and thought-provoking messages. Her debut single “Tigre” (what a fantastic name ;)) calls out badly-behaving men who disrespect women and caught the attention of the hit comedy series Broad City, kicking off a collaboration that spanned multiple seasons, as well as Latinx drama VIDA, which used the song during a highly publicized queer Latin sex scene.

Her second single aptly named “Release the Hounds”, was a protest song she wrote in support for the people of Standing Rock’s movement to protect their land against the Dakota Pipeline. And since then, Jarina has tackled everything from embracing being single (“Billingual”) to complexion-based discrimination known as colorism (“Identity Crisis”) to the power of enforcing your boundaries (“Knock Out”).

Jarina’s latest single “Electrico” continues the theme of female empowerment, encouraging us to love our bodies the way they are. Accompanied by an undeniably racy music video and the best use of Jell-O we’ve seen since the early 2000s, Jarina describes it as “an absolute ode to females & female identified sexuality, sensuality and the personal power that exists in that space. I love using Jell-O because it looks and feels like all the parts that jiggle on our bodies like boobs, butts and also everywhere else like our bellies, arms, thighs…Which leads me to asking the question : why do we only like certain parts of us to jiggle and everything else has to be rock hard? Seems so arbitrary! So, here’s to celebrating your jiggle and bounce wherever it may be!”

Which leads us to one of our favorite things about Jarina (besides her music, of course), which is the fact that unlike so many musicians today, she celebrates herself loud and proud, embracing her shape as one of her greatest strengths. The positive body image that she has cultivated over time serves as an exceptionally refreshing departure from the slew of size 0 musicians that we are constantly bombarded with in the mainstream music space today. “I’m a Latina woman, I’m a voluptuous woman,” Jarina says, “my body has changed and fluctuated in weight throughout my entire life, and I’ve gone through moments of hating the fact that I’ve gained weight. Now I’m in a place where when I go up and down, I just let it be, and I enjoy the parts. For example, when I’m really skinny, I don’t have any boobs. When I’m not so skinny, I got great boobs! I enjoy the parts of me that show up when I fluctuate.”

Whether it be Jarina’s incredibly catchy music, eye-popping visuals, or the mere fact that she is a bona fide badass standing up for everything that matters most – one thing is for certain – and that is that whatever Jarina is up to next, it’s sure as hell going to be interesting. There is something to be said about artists who use their music as a platform to speak out about injustices and bring about change in the world and Jarina is a stellar example, channelling her struggles into change-making and inspiring us along the way.  “My life has been very colorful and complicated so far. I had a lot of sadness early on, but I decided that I wanted to be a part of the light and that I wanted to give light to the world and that’s exactly what I’m on course to do.” Jarina explains, “I will always be on the side of those who need to be heard.”