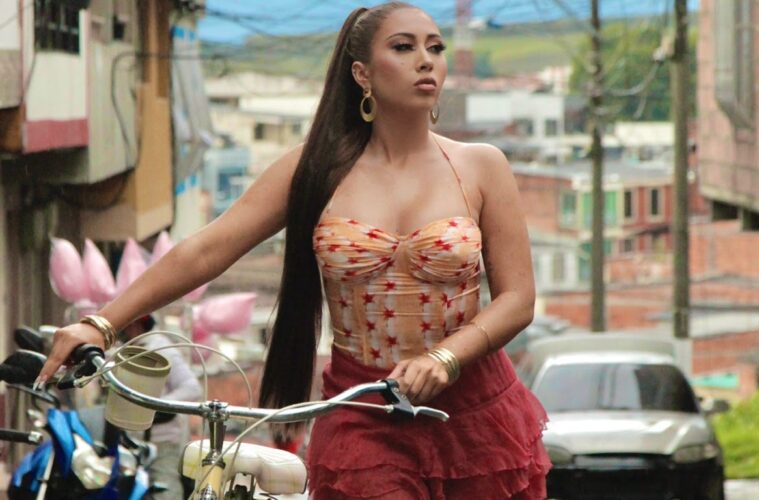 Here are five female artists with Latin roots who grew up coming and going. In some cases, their families migrated and they were raised as foreigners. In other cases, they decided to reinvent themselves in another country. One thing is clear for all of them: their nationalities don’t matter as much as their backgrounds, because music is what connects them to home.

Natalia Peluso wasn’t yet 10 years old when her family decided to settle in Spain. It was 2004 and the economic situation in her home country, Argentina, continued to falter. The music was already running through her veins, and it never decreased during her moves through Alicante, Murcia, Madrid and finally Barcelona, ​​where she now resides. Her training always focused on Afro-American and Afro-Caribbean music, from hip hop to salsa, from soul to reggae. The mixtape Esmeralda (2017) and the EP La Sandunguera (2018) were her first recording steps, and also the perfect excuse to play at festivals like Sónar, FIB and Primavera Sound.

By 2019, Nathy was already a sensation on stage and on social media. Songs like “Corashe” revealed her feminist voice, while others like “Natikillah” openly displayed her sensuality. So everything was ready for her to take the big leap: the release of her album Calambre (2020), now with the support of Sony Music. The video singles confirm Peluso’s elasticity: from g-funk (“Business Woman”) to R&B ballad (“Buenos Aires”), from trap (“Sana Sana”) to reggaeton (“Delito”). A crushing attitude wrapped in XXL nails and super seductive look: Peluso breaks the standards of the perfect slim woman and promotes her legitimate personality.

It’s definitely not common to run into French-Cuban twin sisters who sing in multiple languages, including Yoruba (West Africa tongue, ethnicity and religion). Liza-Kaindé and Naomi Diaz were born in Paris but spent a small part of their childhood in Cuba, while their father – originally from the Caribbean country – played congas at Buena Vista Social Club. Back in France, their mother, a Franco-Venezuelan singer, took them to a Yoruba choir where they began to learn traditional songs. That ancestral music remained engraved in their bodies, and reappeared strongly in 2013 when they created the duo Ibeyi (“twins” in Yoruba).

In 2015, Ibeyi released their self-titled debut album. And little by little they began to recruit celebrities who fell under their spell: Prince, Iggy Pop, Adele and Beyoncé (in fact, the queen bee herself invited them to appear in her spotless visual album Lemonade). In 2017, they crowned their musical evolution with Ash. This second record combines future and tradition, melodies and mysteries, as a magical place that brings together rhythms (trip hop and electronic beats with batá drums and other acoustic percussions), languages ​​(English, Spanish, French and Yoruba) and traveling spiritual stories (from Africa to Caribbean, from America to Europe).

This year, Kali Uchis became the first Colombian to win a Grammy in a non-Latin category (yes, not even Shakira had achieved such a thing). Kaytranada’s infectious hit “10 %”  on which she sings, won the Best Dance Recording category. But there’s a shaky story before this: in the mid-1990s, Karly Marina Loaiza was just a baby going back and forth between Colombia and the United States. She was born in Alexandria, Virginia, but spent elementary school in both countries. In high school – already settled in the US – she learned to play sax and piano. At 18 she was encouraged to show off her vocal talent and her songs in some mixtapes.

Kali began to fascinate in 2015 with her debut EP Por Vida. Thus she began to invade the net with her videos and had the pleasure of working with producers such as Diplo, BadBadNotGood and Tyler, The Creator. After collaborating with Gorillaz and her compatriot Juanes, she released her first album Isolation (2018), full of funky grooves and trippy-jazzy vibes. Once again, she had great producers, as well as several guests (Steve Lacy, Jorja Smith, Bootsy Collins). She emphasizes her Latin roots and bilingual lyrics on her second and most recent album, Sin miedo (del amor y otros demonios), a title inspired by the Colombian writer Gabriel García Márquez.

There was an artist before the artist that we all know today: she wasn’t yet Mon Laferte, but she was already the great promise of Chilean pop, a girl in her early twenties who still introduced herself as Monserrat Bustamante. Her first album, La Chica de Rojo (2003), debuted at # 1 on her country’s best-selling albums, and was quickly certified gold and platinum. However, her career was still tied to plans for a hit television talent scout show. Four years later, Mon felt the need to “give up almost everything” and moved to Mexico. In 2010, after overcoming a severe illness and spending a whole year traveling to Veracruz to work as a singer, she decided to rebuild her career (even if that meant leaving the album she was recording).

Desechable was the first album she released as Mon Laferte (her maternal surname), it came out in 2011 and was followed two years later by Tornasol. In 2015, after dealing with depression, the singer made another break with Mon Laferte, Vol. 1. The retro vibes, fueled by nostalgia for the music she listened to with her grandmother Norma, seemed to be the perfect setting for bolero tunes like “Tormento”, “Amor Completo” and “Tu Falta De Querer”. That wave expanded to the next record, La Trenza (2017), in which she also added collaborations with Juanes and Bunbury. Norma (2018) involved a bigger bet: it was recorded live, with a big band, at the legendary Capitol Studios in LA. This year there’s news: Miss Laferte’s sixth album, SEIS, has just come out.

Some artists give the feeling of having several lives. Argentine singer-songwriter Daniela Spalla is one of them. As a child she began to study singing and piano. And as a teenager she dared to cover some rock and pop classics in a jazzy key, for an adventure that took her from Córdoba to Buenos Aires. But perhaps her first turning point was when Ximena Sariñana invited her to Mexico City to present her EP Magma (2010). By 2013, she had already settled there. The following year, Spalla released Ahora Vienen por Nosotros, a powerful album that brought her some tours and a greater presence on the international billboard.

Daniela changed her style by getting into bolero with the singles “Amor Difícil” (2016) and “Prometí” (2017). It definitely  all fell into place when she started working with producer Adan Jodorowsky. This is how she made Camas Separadas (2018): an ode to heartbreak stories, through ten songs that gravitates to vintage sounds, tropical vibes and calculated doses of melancholy. Then, with the most recent Puro Teatro (2020), she upped the ante with more compact drums and more explicit allusions to the 80s. Spalla seems to have achieved something in Mexico that she always wanted: to take her melodramatic pop to its finest.