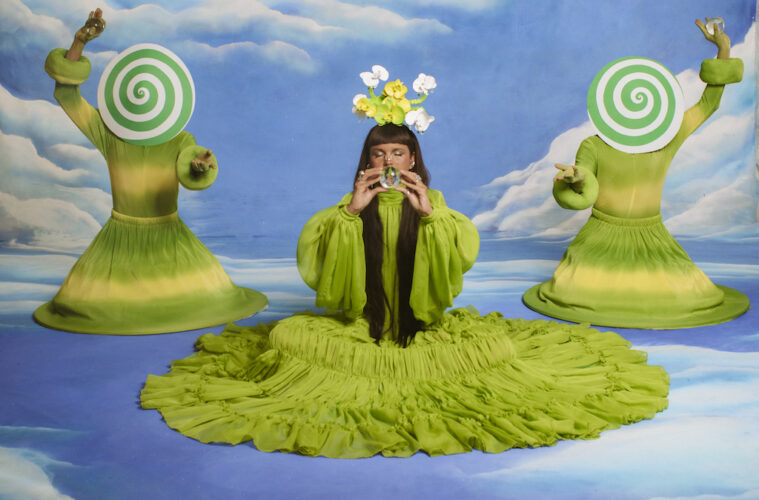 For Bomba’s singer Li Saumet, time off the road has been a moment to reconnect with herself spiritually, as well as with long-neglected family and friends. You can hear the spirit on the single “Ahora,” which spreads a message of mindfulness and being in the present. “I’m seated in the right place/At the correct moment/At the correct time,” she intones at the start of the track, embellished by a gentle electronic beat, natural sounds of birds and waves crashing, the product of Simón Mejia’s recent experiences with field recordings.

The album ‘Deja‘ is divided conceptually into four sections that correspond to the earth’s four elements: Agua, Aire, Tierra, and Fuego. “The album is about the connection and disconnection of human beings—from the planet, from one’s own self,” Li says. “It’s about how we’re disconnected, more connected to electronic devices and virtual things than real things. So we decided to use the four elements, because they’re part of the equilibrium of human beings.”

As 2021 awakens, trying to shrug off the dark cobwebs of a tumultuous year of uncertainty, Bomba Estéreo is trying to reassure everyone that it’s going to be okay. In the middle of the pandemic, the Colombian electro-folkloric dance band and a community of collaborators got together in a Caribbean beach house in Santa Marta. Where the Sierra Nevada mountains meet the sea, they let it all go and recorded the album ‘Deja.’

This time, the band decided to self-produce the album (outside of a couple of invited guest producers likeTrooko) and constructed a makeshift studio in Li’s home in Santa Marta. “We all wound up there and we made an album that has some of the best of classic Bomba, like ‘Elegancia Tropical,’ and a lot of new composing elements that José and Pacho brought,” Simon said. The pandemic’s delaying effects also gave the band plenty of time to produce and mix ‘Deja‘ with a major assist from Damian Taylor, known for his work with Björk and Arcade Fire.

‘Deja‘ is one of those albums that, even in its disparate sections, forms a unity. It’s an album that transmits joy, loss, exhilaration, and sadness all at once. “Some heavy things are happening to the world and we have to share them,” Li says. “We made this album so you can dance to it at a club, but at the same time it has a profound meaning. It’s meant for you to dance perreo with a conscience.”