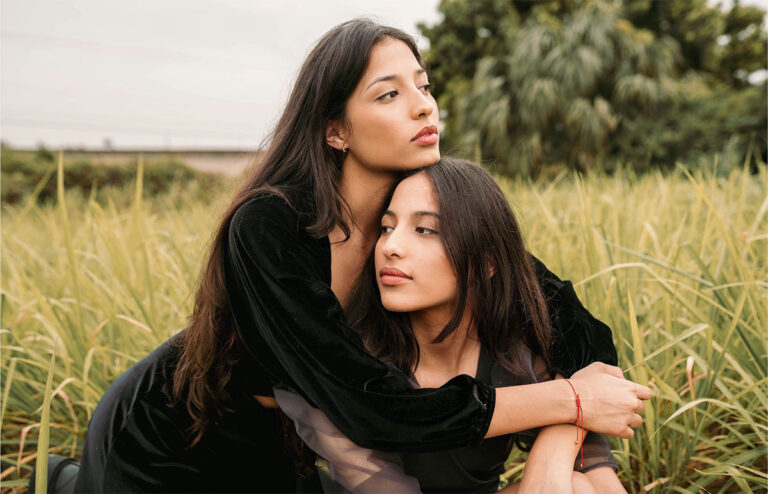 Meet Vale: The Singer-Songrwiter Twins to Watch Out of Colombia

One of the releases we’re most excited about is from twin duo, Vale. We first found Valeria and Valentina on Instagram, and were blown away by not only their obvious talent as individual artists, but also by their ability to harmonize in the most ethereal of ways. On August 27th, they welcomed their new album into the world, titled Línea Recta. This beautiful collection of music is made of eight tracks, and was written / produced with some of the biggest names in the Latin industry, including superstars such as Juanes. Their first song, Pasatiempo, is a “declaration of love.” The song tells the story of an individual who realized they liked someone more than they’d planned and are ready to take things to the next level. They also describe the album as, “an invitation to give up on that quest for perfection,” and “a tribute to imperfections and real beauty.”

The two musicians grew up surrounded by music, despite not having a musical family. Valentina explains to us that her father always woke them up on Sundays listening to salsa, which became a way for the girls to discover their love of singing and harmonizing. At the age of nine, they began writing their first songs and poems. Instead of playing with dolls, they made music, and their mother encouraged their gifts by enrolling them into guitar classes. A few years later, at 12 years old, they started classical musical training, with Valentina practicing piano and Valeria practicing the double bass. During this same year, they began uploading their covers onto youtube.

Thanks to their classical training, the twins won a scholarship, giving them the opportunity to study further in Louisiana. At local festivals and bars, they began performing publicly as the talented duo we know today.

When we first heard Vale live in the studio, we were hosting a small, intimate jam. When they took the mic, we couldn’t believe their angelic harmonies. One of the twins took to the guitar and both took to the mic, singing a few of their original pieces, alongside classics such as Valerie by Amy Winehouse and Put Your Records On by Corinne Bailey Rae. While it was a small crowd, due to it being a rehearsal, everyone sang along – swaying, smiling, and presently enjoying the moment.

We can’t wait to see what the future holds for these young, talented musicians who are not only inspirational and gifted, but also kind and soulful. Their newest album is out now, and available on all major listening platforms. We can’t wait to dive in.