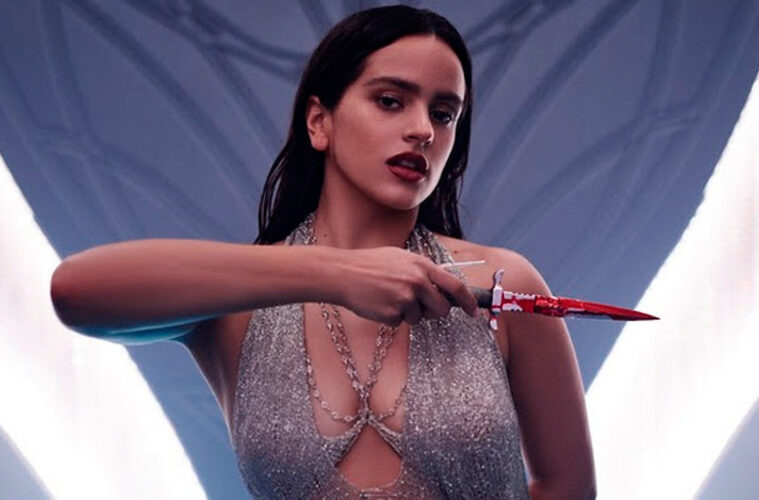 The year is ending and many of us are already beginning to ponder the “Best Of” lists for 2021. Fortunately, there are a few more we can add to that list with these new releases.

We’re really enjoying hearing The Weeknd sing in Spanish to the beat of an electro bachata rhythm. “La Fama” could be introduced as a return of the remix of “Blinding Lights” that Rosalía and the Canadian artist put together last year, but it’s actually more of a soap opera musical fantasy that came true for the two of them. In turn, each one sings: “Fame is a bad lover and she will not really love you/ It’s too treacherous and, as it’s coming, it goes away.”

“La Fama” is the first single from MOTOMAMI, Rosalía’s third studio album, scheduled for 2022. Here she’s seen as a diva, swaying like a snake and dazzling everyone with her flamenco-style siren song. This musical track fuses the Latin pulse with the Arabic serpentine arrangements. The Weeknd, of course, doesn’t resist: bewitched, he lends himself to the melodrama game. In this show, there’s blood, passion, and everything in-between.

Dellafuente, whose real name is Pablo Enoc Bayo, has already been featured in Tigre Sounds, for an Andalusian R&B special. At that time, we didn’t know about Milagro, his brand new “resurrection” album. It so happens that in mid-2020, after releasing Descanso en Poder, the rapper from Armilla, Granada, proclaimed his intention to close his career under this stage name.

However, things have changed and here we are with this musical “miracle” involving seven new songs, which is divided into two parts, each lasting 22 minutes. On the first side, two versions have already been released: “León Con Uñas de Gel” and “Dime Si Con Eso Vale”. What we hear is proof of how well Dellafuente handles trap and urban music, successfully communicating everything he wants to say.

Valentín Oliva, aka Wos, is back with a new album entitled Oscuro Extasis. The successor to the acclaimed 2019 debut Caravana and the 2020 EP Tres Puntos Suspensivos offers several singles that stand out (including “Niño Gordo Flaco”, featuring the rising and talented Ca7riel). But there’s something that makes “Cambiando La Piel” one of those songs that captivates us from the start, and remains on repeat. It’s what happens with any potential hit.

Here we ride to the groove of a very catchy beat, with effective and witty rhymes, and an empowering pop hook in its chorus (“I’m changing my skin, surviving / From the ashes of yesterday, I’m reborn”). Nicki Nicole’s feminine vocal input acts as a welcomed complement to the former freestyler.

Mateo Palacios, alias Trueno, was only 17 years old when, in 2019, he has crowned the Argentine champion of the Batalla de Los Gallos, the most important freestyle rap championship in the region. During 2021, already 19 years old, this young man from La Boca set out to cause a sensation with each of his singles. First, it was “Feel Me”, then “Salimo’ de Noche” (with Tiago PZK), and finally “Dance Crip”, to celebrate his fruitful harvest and as a preview of a future album.

From the outset, the musical track is contagious and serves to make it explicit. “Dance Crip” is a tribute to old-school hip hop. Here there’s plenty of flow, with each sample acting as a reference of style and attitude, starting with the most obvious: “Rapper’s Delight” by The Sugar Hill Gang. Trueno goes out to shake up his neighborhood, riding his bicycle, doing gymnastics with the retired people, and creating a feast in the middle of the street. At the end, he drops one more sample: “Coolo” by Illya Kuryaki and The Valderramas.

This single, accompanied by a video that’s already a work of art, was actually released late last month, but its shocking effect still lingers through November. Five years after their debut EP, we hear yet again from GENER8ION, the multidisciplinary collaborative project led by producer and composer Surkin and director Romain Gavras. For the making of “Neo Surf” they invited Danielle Balbuena, aka 070 Shake, a close collaborator of Kanye West and a featured artist on his G.O.O.D Music label.

In Neo Surf, a hatch opens and a piano transports its 50’s ballad chords into the year 2034, “in a disillusioned and damaged world, with puzzling poetry embodied by idle youth and underlying violence.” The deep and emotional voice of 070 Shake unfolds between abandoned ports and stranded ships found throughout images produced by Gavras in Athens. It’s the dance of the survivors. It’s the resurgence of a young joy, after decades of adult pettiness. It’s the surf of a new era.