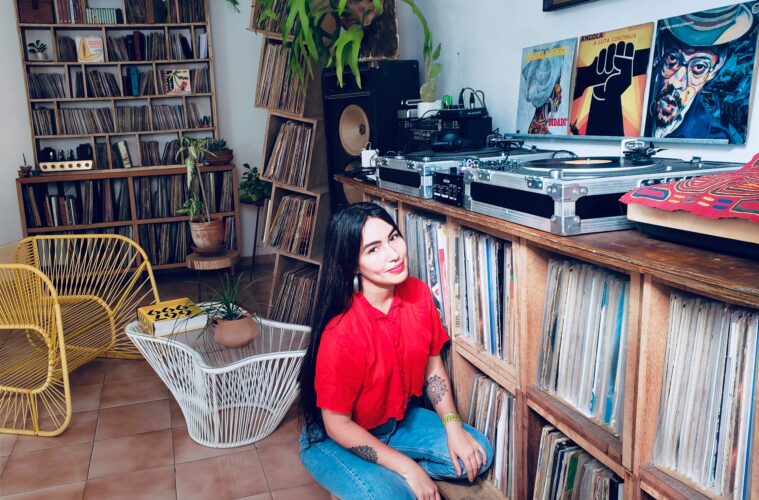 The Latin Selectors With Hidden Jewels

There are plenty of talented musicians and artists propelling Latin music–and all that entails–onto a larger scene, but it’s the digital platforms and its many DJs who have helped keep the roots of the sound alive. While supporting emerging sounds, they also work in a history lesson or two with their impeccable vinyl selections and sonic storytelling. Here are a few of our favorite latin Selectors:

One of the most unique and uncompromising DJs in the world, Coco Maria is a selector and a radio host for her show on Worldwide FM. Hailing originally from Mexico and now based in Europe, she specializes in Brazilian, South, Central-American, and Caribbean wax. Irresistible slices of bossa nova, samba, cumbia, and all sorts of rarities from sunnier, far-off places.

‘Cami Layé Okún is a Cuban DJ/selector inspired by the worldwide cultural diversity of rhythms. She collects vinyl records from all over the world as a way of sharing stories through music. Her sound spans from the tropical to the tribal; think African and Caribbean rhythms mixed with a Latin soul and sensibility. She brings together many of the lost sounds of the diaspora to move dance floors across the world.’ [Trippin World]

“Mario Galeano Toro is a Colombian musician, composer and producer, recognized for being a spearhead in the new periphery cumbia movement, after dedicating more than 15 years to experimenting and investigating Latin American cumbia, as well as creating an electronic and avant-garde sound. Being one of the most influential musicians when it comes to Latin American culture, he leads cult projects such as Los Pirañas, Ondatrópica and Frente Cumbiero.” [Biche]

“Chicago born/Miami raised, Mickey Pérez is a first generation American of Cuban & Ecuadorean descent who’s been putting down the funkiest rhythms from Africa, South America, Brazil, the Caribbean & U.S. to NYC dance-floors strong since 2008. A Brooklyn resident since 2002, his Borderless Diasporic Disco Sound’s been holding down a weekly residence called Rhythm Section Sundays at Bembe for the past 5 years in addition to playing regularly throughout Brooklyn & Manhattan.” [Resident Advisor]