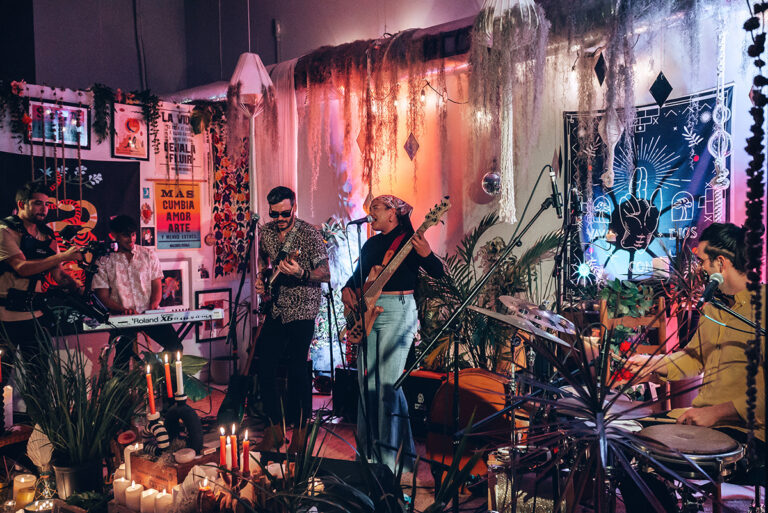 For every artist, there’s a unique ambiance that fills the room as they enter. Their essence takes over, and when the instruments play and their voices harmonize, the effect is otherworldly. With Tonina, that’s precisely what we as a crowd witnessed within our very own, Tigre Den. For those of you who don’t know Tonina, you can find her speaking not one language, but three: English, Spanish, and Italian. Tonina’s official title, like her multiple languages, also can’t be classified in a single category. She’s a multi-talented singer/songwriter, bassist, and music journalist, with early exposure from a music-oriented, Black and Sicilian background, to styles such as funk, jazz, soul, and classical music. When we take all of these various factors into account, we understand what’s given this artist her unique sound and presence.

The song she performed at the Tigre Den is from two classic icons, Willie Colon and Hector Lavoe, titled, “Que Lio.” It’s a song that captures the attention of an audience right from the beginning, with it’s sensual, soulful, and warm sound. Tonina’s rendition starts off with just her, as the band slowly starts to join. Captivated by her velvety vocal chords, the harmony of the band, and the grounded strum of her cello, this was a performance that had us perfectly present.

Her family’s roots are jazz-infused, named after her uncle, Tony Saputo. Tony was a St. Louis musician who was a part of Reba McEntire’s band – part of the same band that perished in a 1991 plane crash. In our last article about Tonina, we mentioned this quote and we’ll mention it again now, “I really do think of my purpose as in being able to carry on a legacy of my uncle and what he would do if he was able to play music in the physical world. That’s a lot of inspiration for me.”

Tonina’s musical background includes two degrees from Berklee College of Music, with other real-world accomplishments such as opening for a Grammy-Award winning artist, performing at the Catania Jazz Festival in Sicily, being named one of NPR’s favorite new artists, (as well as one of NPR’s top 10 artists during that year), and ending up on Barack Obama’s top songs of 2018 with her rendition of “Historia de un Amor.”