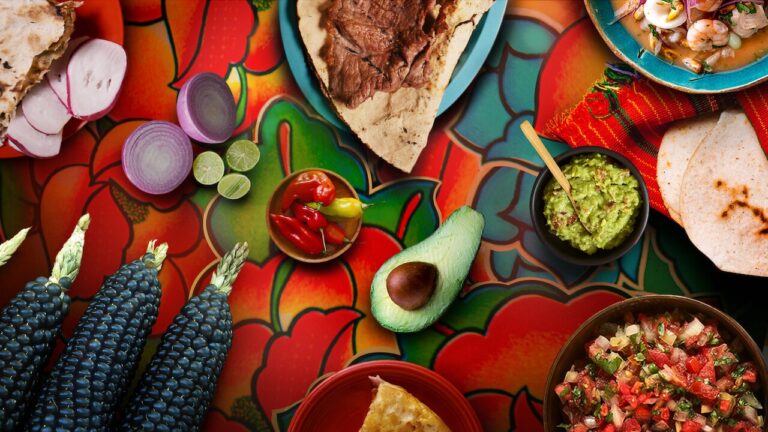 If you haven’t sat down to watch Netflix‘s latest culinary journey, Street Food: Latin America, you’re in for a treat. From the same team behind the luxurious Chef’s Table series comes a show that hits right to the heart of cultural magic: it’s street food. The first season’s tour of Asia was enough to set the taste buds soaring, and now they’ve come for our beloved Latin American continent.

Whether you’ve watched it or not, here are some emerging acts that should be on your radar from each of the episode’s destinations:

Los Espirutus – We’ve referenced this band quite a bit because we love their psychedelic/rock sound and their live videos only make us want to head to Buenos Aires immediately. Their albums are impeccable cover to cover, including the actual artwork.

Churupaca – A personal favorite of our Founder’s, this group’s sound is everything you love about South America with a heavy folkloric foundation and a funky, eclectic rhythm. Everything about their aesthetic, brand, and general fusion is worth your time.

Conociendo Rusia – Discussing music with Argentinians in the know, and chances are this act will come up early on in the conversation. His music is buzzing hard right now, and not surprisingly so with his heavy indie influence and passionate musical attack.

Mariana Froes – One thing we love about world music is that you’ll discover a familiar sound pretty much everywhere you look. This emerging act has that sultry, youthful acoustic sound you know well.

Gilsons – Aside from the fact that they’re the sons of the great Gilberto Gil (hence the name), they’ve given a bumping, modern twist to the easy listening sound their father pioneered.

Curumin – On the stripped-down alternative side of Brazilian music, this multi-instrumentalist and producer has found a way to bring together the country’s most notable genres–samba, funk, and bossa nova–under a lo-fi roof.

Girl Ultra – Talking about hot music coming out of Mexico, you can’t leave out Girl Ultra. The R&B artist out of Mexico City has that wispy, nostalgic sound of early Lana Del Rey, with the funky, hip hop elements on trend of the moment.

Silvana Estrada – If you’re a sucker of a quirky voice and a classic, acoustic sound, Silvana Estrada is just for you. While much of the musical make-up might seem familiar to you, there’s an essence in her music that is wholly unique.

Sotomayor – This electronic music project with afro-Latin influences is the brainchild of two siblings intertwined by sound. They mix pretty much every Latin genre together into an addictive charge that could not be more cutting edge.

Novalima – This Latin GRAMMY-nominated act boasts the kind of indigenous-infused music you’d expect from a funk outfit. Afro-Peruvian at its core, you’ll hear a variety of instruments propelled by a powerful voice at the forefront.

Shushupe – You want to feel like you’re part of a massive jungle dance party? Shushupe will most definitely quench that thirst for you with here jungle-tronica prowess and high-tempo jams.

The Bongo Hop – Colombia is a huge country, which means its music will be incredibly varied. Its Caribbean coast takes many influences from reggae and funk, and this band is a perfect example.

Cero39 – This electronic duo blends together the many sounds of its vibrant country in an infectious, modern way. Imagine indie mixed with reggaeton, and tropical sounds with funky beats.

Juan Pablo Vega – We’ve loved this troubadour for a while now, and always have an eye on how he keeps one-upping his own sound. Recently, he’s released a string of eclectic, funky and up-beat tracks we all need more of today.

Los Kjarkas – These guys are absolute legends and one of the most popular Andean folk music bands in the country’s history. While it was hard to find up-and-coming acts, we found treasure troves like the Andean pan-flute sounds of this one.

Savia Andina – Another beloved Bolivian act, this group gained notoriety in the 1960s and is still one of the most famous Andean acts of all time.

Luzmila Carpio – This Bolvian singer is a powerful voice in the Andean musical community, and was even the Bolvian ambassador to France for half a decade. Her music is regaining claim with new remixes by fellow Latin producers.