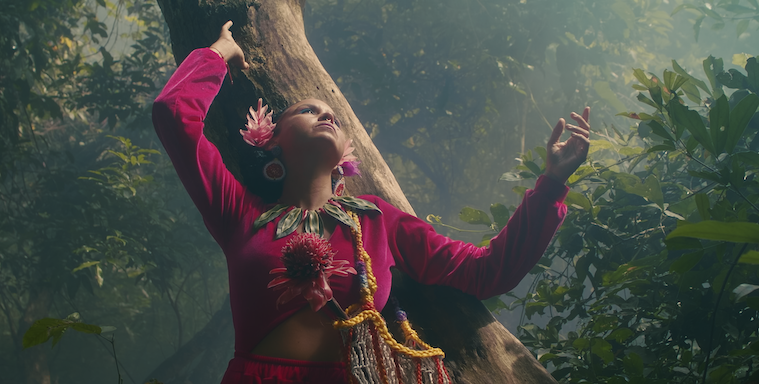 TigreFebruary 2, 2021
New MusicNews
Colombian stars Bomba Estereo have announced ‘Deja,’ their long-awaited first album in 4 years. And to accompany this long-awaited announcement, they’ve released the first three songs on the album: “Agua,” “Deja” and “Soledad.”
The “Agua” music video was directed by Bomba’s singer Liliana “Li” Saumet and Jhoy Suarez. “The video comes from an idea I had about a ritual, entering into a parallel universe in which we find ourselves in a deeper connection with nature, in a more pretty, surreal and feminine way,” Li explains. “I wanted to start the album with this feminine energy having key women from nature in it. To me it was also about the place I live, Colombia’s Caribbean coast, with this tree full of light and my close friends as natural beings.”
‘Deja’ is divided conceptually into four sections that correspond to the earth’s four elements: Agua, Aire, Tierra, and Fuego. “The album is about the connection and disconnection of human beings—from the planet, from one’s own self,” Li says. “It’s about how we’re disconnected, more connected to electronic devices and virtual things than real things. So we decided to use the four elements, because they’re part of the equilibrium of human beings.”As 2021 awakens, trying to shrug off the dark cobwebs of a tumultuous year of uncertainty, Bomba Estereo is trying to reassure everyone that it’s going to be okay. In the middle of the pandemic, the Colombian electro-folkloric dance band and a community of collaborators got together in a beach house in Santa Marta. On the Caribbean coast of Colombia, where the Sierra Nevada mountains meet the sea, they let it all go and recorded the album ‘Deja.’

Bomba, whose core members are beatmaster/composer Simon Mejía and vocalist/lyricist Li, have been a major force in the alternative/Caribbeat/dance scene since 2010’s smash hit “Fuego.” Subsequent releases like Latin Grammy nominated ‘Elegancia Tropical’ (2013), Grammy nominated ‘Amanecer’ (2015), and Grammy nominated ‘Ayo‘ (2017) have put them at the forefront of influential hybrid-beat bands, as well as blowing up dancehalls from New York to Paris to Tokyo.

‘Deja‘ was born on a tour bus in 2018, when, during a long European summer tour, beatmaster/composer Simón started to jell with José, crafting tracks on the fly. “It was our last big tour as a band,” Simon recalled. “We went home thinking our next tour is going to be even bigger!” But then the pandemic came.
For ‘Deja,’ Simón and Li wanted to make the album more of a “community” effort. Simon found increasing chemistry playing live shows with guitarist José Castillo and the folkloric percussion of Efrain “Pacho” Cuadrado. Li recruited her longtime friend Lido Pimienta for the session – the pair’s previous collaboration “Nada” ended up on Barack Obama’s “Best of 2020” playlist.“I wanted to collaborate with Lido to try new sounds with my voice,” Li explains. “She has that underground edge that I like, and she also invited some Cuban collaborators with her, a duo named OKAN. It was super beautiful to have more women with me, I felt more supported, safer and at ease.”
This time, the band decided to self-produce the album (outside of a couple of invited guest producers like Trooko) and constructed a makeshift studio in Li’s home in Santa Marta. “We all wound up there and we made an album that has some of the best of classic Bomba, like ‘Elegancia Tropical,’ and a lot of new composing elements that José and Pacho brought,” Simon said. The pandemic’s delaying effects also gave the band plenty of time to produce and mix ‘Deja’ with a major assist from Damian Taylor, known for his work with Bjork and Arcade Fire.The title track is one of the more moving songs on the album, as Simon observed, an attempt to deal with problematic things that we should not try to hide away in our quest for constant diversion. “‘Deja’ talks about depression,” Li explains. “Both Lido and I have had close contact with people who have suffered from depression and regrettably have died from it. This song tells people that you have to get out of it somehow, by singing, dancing, even crying. If this song works for one person, mission accomplished.”‘Deja‘ is one of those albums that, even in its disparate sections, forms a unity. It’s an album that transmits joy, loss, exhilaration, and sadness all at once. “Some heavy things are happening to the world and we have to share them,” Li says. “We made this album so you can dance to it at a club, but at the same time it has a profound meaning. It’s meant for you to dance perreo with a conscience.”
Compartir artículo