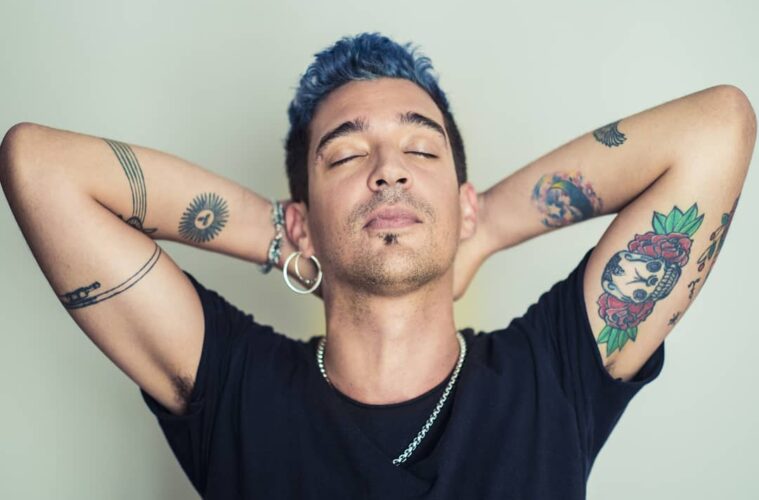 Andalusian musician Muerdo says he’s always asked about the moniker under which he pens his eclectic melodies. “It’s just a name I like because it’s completely ambiguous,” he tells me over a Zoom call. “It’s not singular or plural, it doesn’t have a gender, and it sounds like a word we use here in Spain that signifies a passionate kiss. It has all the characteristics that a good name should have.”

Like the enigmatic allure of his stage name, Muerdo’s sound is one that refuses to be defined – the artist easily moves from genre to genre, incorporating a fluid melange of Latin-influenced and Mediterranean-inspired harmonies with indigenous instruments, reggae and hip-hop beats. It traverses continents, collaborators, and current events as fodder. Making music since the age of eight and formalizing his unique musical project as Muerdo when he was just 21 years old, the 32-year-old artist is driven by experimentation and an unrelenting thirst for reinvention.

His latest album, La Sangre del Mundo, set to debut later this year and of which the title track will debut on October 23, took Muerdo to Buenos Aires where he worked alongside Diego Perez of Tonoloc to produce the record. Conflating a furtive mix of Argentinian folklore, indigenous rhythms and electronica, the album builds on the lyrical tradition of famed tangueros like Martin Fierro and poets like the Cuban revolutionary Jose Martí.  “We’ve also worked with the chacarera, with samba and we’ve incorporated a lot of electronic music, which is different for me and I think makes it very original,” he says.

The creative process he enjoyed alongside his friend and long-time collaborator Perez was one that was seemingly uninterrupted by the abrupt halt of Buenos Aires’ bustling city life. “I would come into the studio every morning with proposals for lyrics and melodies, it was very hand in hand,” says Muerdo, who wrote nearly every song on the album and additionally credited sound engineer Matias Cella’s melodic ingenuity.

According to Muerdo, the album also carries a crucial message about this particular moment in time. “It’s not necessarily about what we’re presently going through but it does talk about isolation, that society is becoming increasingly automated and being together is suddenly dangerous,” he says. “So it’s about sharing space from a personal place, and personal growth too, which I think we’re all experiencing as we’re waking up our collective consciousness.”

With a sound that doesn’t so easily fit into a box, Muerdo is a musician who proves that experimentation is what helps artists thrive even in the darkest of days for the industry at large.