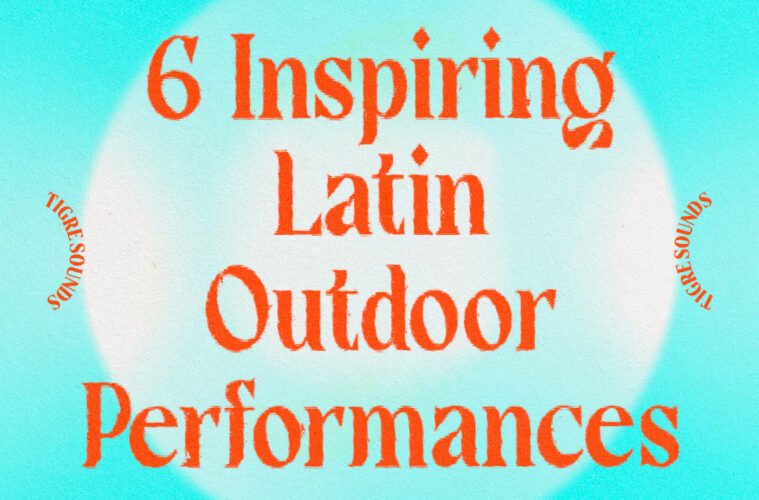 Music is in the air, or at least it certainly is when it takes place outside. Appreciating a musical performance in an open space has become extra valuable in times of confinement and postponed indoor concerts. In this selection of inspiring outdoor recordings, we traveled to cities such as Catalonia, Veracruz, Madrid, Bogotá, Alajuela  and Cabo Polonio. In this article, we’re celebrating the reverberation of music in natural elements, whether that be under the trees or next to the ocean.

The scene feels familiar. With a typical lunch table surrounded by an oasis of trees, we’d imagine this could be a family of musicians, with the mother, Elizabeth, on guitar and grandfather, Horacio, on double bass. Meanwhile, cousin Juan takes on percussion. Everyone seemingly enjoying the afternoon with a lovely song that the gifted Rita offers to sing. The truth is that, as far as we know, only Elizabeth and Rita share the bond of mother and daughter. Nonetheless, the musical communion that occurs in this environment is acoustic and warm, enhanced by a voice that both amazes and impresses.

Rita Payés is barely 21 years old. Not only does she sing beautifully, but she also plays guitar and trombone. “Nunca Vas a Comprender” is one of the songs on Como la Piel, her first album released in mid-April this year. At her side, as a companion and partner of the project, is her mother, Elizabeth Roma. This young Catalan artist was born in Vilasar de Mar, close to Barcelona; an old fishing village in the Maresme region. We regard her as a passionate artist, with obvious traces of sensitivity, as well as enormous talent. She moves her melodies through the lands of jazz, bolero and bossa nova. She’s had such an effect, that even C. Tangana recognized her influence on his hit “Comerte Entera”.

Enough has already been said about the incredible double album that is Musas, released in two volumes between 2017 and 2018 by Natalia Lafourcade and the guitar duo, Los Macorinos. It’s undoubtedly the best tribute from the Mexican singer-songwriter to Latin American folklore and bolero. From that extensive collection came several video singles. Some were filmed as casual performances, such as a living room party held in an old house. Others were performed singing for the elderly in a nursing home. Among all of these clips, one stands out that was recorded live and outdoors: “Mi Tierra Veracruzana”.

In this video, we’re lead to believe it’s a splendid weekend to spend in a country house, with the birds seemingly celebrating the meeting of loved ones enjoying gathering around an outdoor dinner table. There, Natalia begins to softly sing this tune that she dedicated to Veracruz (it’s worth clarifying that she spent much of her childhood in Coatepec, a city in this state). The song grows little by little, as the musicians are added. Lafourcade said that it’s a small “flirtation” with the son jarocho – a typical music genre of that area, usually used to teach a stomp dance. At the end everyone shouts “Bamba”, to close the circle of traditions from Veracruz.

Cabo Polonio is a very special place. This small beach town is located in the department of Rocha on the coast of Uruguay, and is also a national park. There’s no electric light there. At night, everyone orients themselves thanks to the light of its lighthouse, declared a historical monument decades ago. It can only be accessed by 4×4 vehicles or on foot, about 7 km between dunes and forest from its entrance on the main highway. While it may be an adventure, getting there is worth it. In the summer of 2011, two Argentine girls known as Lola Aguirre and Julia Ortiz made the effort, finishing their vacation days with songs in the sunsets.

“Ríe Chinito” was one of those songs, written by Lola, whose sound they describe as “a punch of smiles”. This video is not only a documentation of a beautiful afternoon, but it also caused an unexpected success of views. It turns out that Perotá Chingó was born from the viral response that this clip gained on YouTube. On their official website, they explain this moment as follows: “What began as an innocent musical adventure marked the fate of these two childhood friends.”  To date, this alternative folk duo has already spread their music across several continents and has released four albums.

Vicente García is a Dominican singer-songwriter who resides in Colombia, but this performance that went viral was recorded in Costa Rica. More precisely, in Las Cataratas de La Paz, a natural park with a tropical forest and a beautiful waterfall placed in Alajuela province. Vicente arrived there with his acoustic guitar and with the Costa Rican singer, Kumary Sawyers. Together, they would play “Dulcito e’ Coco” with a gorgeous green backdrop of exuberant nature.

This song clearly reflects García’s foray into Afro-Caribbean and Antillean cultures, revealing elements of the Cuban son. He does so without taking too much distance from the other musical genres that this album addresses, such as bolero, bachata and reggae. “Dulcito e’ Coco” is included in his second album, A la Mar, from 2016, which is considered his best work yet, giving him international recognition thanks to its three Latin GRAMMY awards. His career dates back to 2002, when he was a member of the band Calor Urbano.

El Retiro is a historic garden transformed into a public park in the heart of Madrid. In fact, a few days ago it was declared a World Heritage Site. This was the location chosen two years ago by Pascual Cantero, better known as Muerdo, a Spanish singer-songwriter and poet who appeared in the music scene around 2011.  Since then, he has already released six albums. “Canto Pal Que Está Despierto” belongs to the 2015 third album, Viento Sur. During this time, he encouraged himself to combine folkloric roots with urban genres such as hip-hop and rock.

In this video, Muerdo is accompanied by Ohad Levy on guitar and Pedro Pastor on the mic. The lyrics include a quote from a poem by the Uruguayan writer, Mario Benedetti, and unleashes a chorus with the force and emotion of a soulful protest song: “I sing for the one who’s awake/ And for those who swim in their crying/ I sing for those who are afraid / But are able to face it/ I sing for good and bad/ And singing I get up/ I sing out of necessity.”

There’s nothing better than finishing this selection with a performance by Bomba Estéreo for La Blogothèque; the online platform and artistic phenomenon created by French director, Vincent Moon. Vincent is a pioneer at filming musical performances outdoors in unexpected places. This two-part special was created in 2011 in Bogotá for the famous Take Away Shows, hosted by the website. The first part of the short film shows the band in situations that seem to reflect their daily life – leaving their apartment, walking through the streets, and playing in a square, all while keeping to the acoustic and portable format.

The second part, however, expands outside of their daily reality, which is precisely why it’s our chosen feature. This is a magical and spontaneous video that captures Bomba Estéreo playing two songs during an excursion to the Monserrate hill; an elevated icon of the Colombian capital. Initially, they perform “Sintiendo” while ascending. When they reach the top, barely touching the clouds, they do a performance of “Pa’ Respirar”. All of the songs make up their third album, Elegancia Tropical, projecting the group as recognizable within electronic and alternative cumbia.