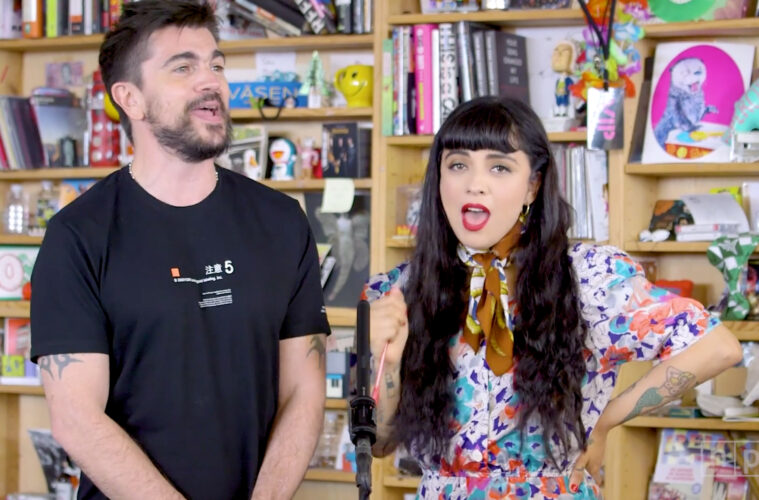 5 Latin Performances to Check Out at Tiny Desk Concert

A decent live music session to watch online became really valuable these days. Sure, recording or streaming a concert allows artists to stay active in pandemic times. We regret the absence of live shows and these audiovisual incentives became a kind of proof of musical legitimacy.

The truth is that live music sessions were already overflowing on the web, even long before social distancing shook our normal life. One of the most original ideas was undoubtedly that of the NPR Music Tiny Desk Concert: a small-format performance with reduced instrumentation, generally acoustic. In the last years, some Latin artists who sing in Spanish also began to accept this invitation and ventured into the little studio. Take a look at our top 5 picks!

In early 2017, Mon Laferte amazed us with the release of “Amárrame”, the advance single from her album La Trenza. There was no heartbreak in that song: passionate pop cumbia with suggestive lyrics, an exciting place between folkloric and kitsch. And there was a special guest: Juanes. This is how the chemistry between the Chilean singer and the Colombian star began. It was also the perfect excuse for the two of them to share this Tiny Desk Concert in May 2018.

Mon begins with an intimate version of “Pa’ Dónde Se Fue”, keeping intact the Andean folk vibes that surround the song. For the end, Juanes does something similar with a stripped-down version of “Es Tarde”. In the middle, they sing together “Amárrame” and “Fotografía” (Juanes classic that originally featured Nelly Furtado).

To identify Jorge Drexler there’s an unforgettable story at the 2005 Oscars. It turns out that the Uruguayan songwriter wasn’t enabled to perform live “Al Otro Lado del Río”, nominated that year for Best Original Song, but he had his revenge when he won and received the award: he didn’t thank and in return he sang a little part of his tune a cappella! For those who already know him, there’s not much secret: a career of 30 years, with almost 20 albums as backup.

Jorge and his fascinating band came to Tiny Desk in April 2018 to perform four songs: “Movimiento”, “Silencio”, “Asilo” and “Telefonía”, all from his latest album, Salvavidas de Hielo (2017). An important detail: for this performance, NPR Music included English subtitles to better appreciate the poetry and lyrical creativity of Drexler.

Natalia Lafourcade emerged in the early 2000s as one of the renewing voices of “alterlatino” (Latin alternative rock). However, it didn’t take long for her to embrace the popular songbook and pay tribute to the Mexican traditional music, from the classic boleros by Agustín Lara to the old melodies from areas like Oaxaca and Veracruz.

One of Lafourcade’s great tributes to the folk music of her land took shape in Musas. For this album, released in 2017, she brought the legendary guitar duo Los Macorinos into her band. So, with this repertoire and this naturally acoustic line-up, Natalia landed on the cozy and friendly Tiny Desk set at the end of that year. Her performance included three songs: “Soledad y El Mar”, “Mi Tierra Veracruzana” and the lovely hit “Tú Sí Sabes Quererme”.

New York’s connection with salsa is historical: from there, in the early 1970s, this originally Caribbean rhythm spread as a worldwide phenomenon. So it’s no coincidence that it was in that city where Los Hacheros emerged. This Afro-Cuban music group follows the tradition of the legendary Fania All-Stars. Everyone in the band plays more than one instrument, and they excel at each one: from violin to trombone, from güiro to flute, from tres to congas.

In mid-2016, Los Hacheros were releasing their second album, Bambulaye, and they didn’t want to miss the Tiny Desk invitation. Three songs were enough to keep you shaking: “Baila con Los Hacheros”, “Papote’s Guajira” (from the debut record Pilon) and the brand new “Bambulaye”.

Monsieur Periné is a rarity: they are from Colombia – a land historically in love with cumbia and vallenato, and from where reggaeton stars sprout today – but they pay tribute to swing, gypsy jazz and bolero. They know how to recreate old music and color it with their tropical charm.

Monsieur Periné performed at Tiny Desk in early 2016. Not long ago, they had been awarded Best New Artist of 2015 at the Latin Grammys, thanks to the album Caja de Música, released that year and produced by Eduardo Cabra (ex Calle 13). In fact, the band led by singer Catalina García started with their single from that time: “Nuestra Canción”. Then came “Sabor a Mí” and “La Muerte”, from the debut record Hecho a Mano, released independently in 2012.

In case you want more, we add another top 5…